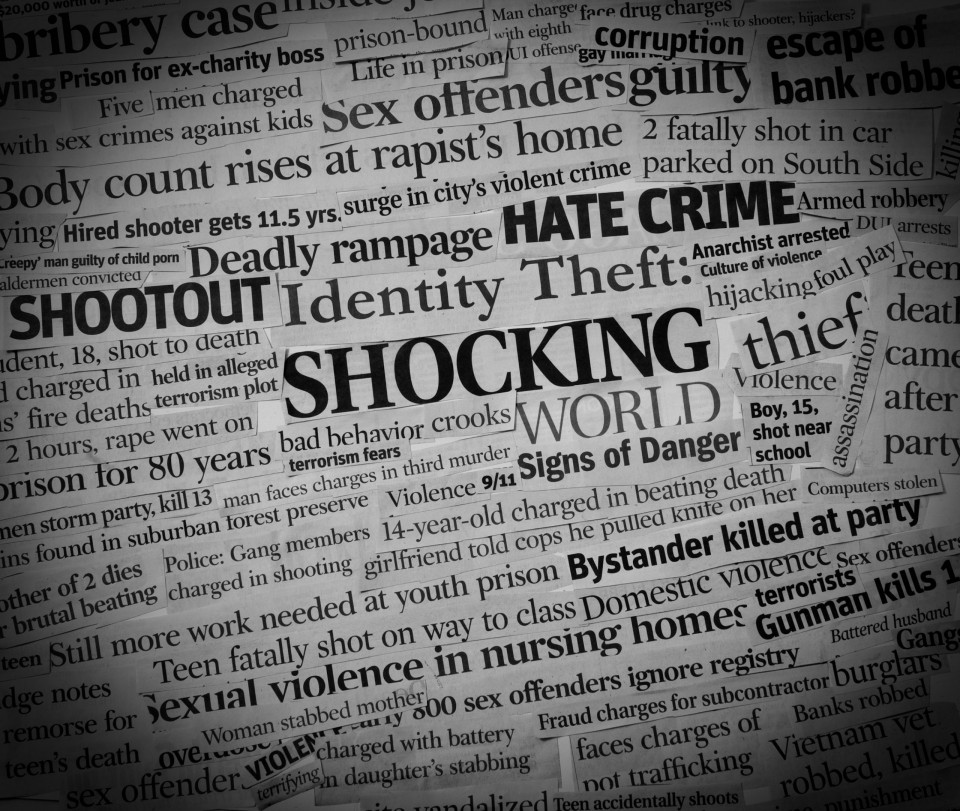 As I slid into the coveted parking spot, the yellow sports car screeched to a stop next to me, trapping me against the curb.  A large angry man quickly jumped out, striding towards my door.  He was cursing and shaking his fists at me, and as the threat grew larger, I realized that I had nowhere to go.  I was a student at Portland State University, and this morning was no different from any other.  Get up early and fight traffic to get downtown in time for class.  Circle the blocks around the campus while searching desperately for that elusive parking space.  As I turned right on a red light, a 280ZX came barreling down on me, blasting his horn and swerving to my left.  I glanced out of my window as he passed, and frustrated, muttered a few inadvisable and ill-timed words.  Right then, our eyes met…

I heard his screaming as he approached, and time froze.  What should I do?  His contorted face grew worse as, outraged, he leaned forward to spit in my face, his saliva slamming against the glass.  Stepping back, he started to kick in my driver-side door—one, two, three times.  As frightening as this all was, however, what is burned in my brain is what happened next.  Turning to leave, he paused and gazed at me for a split-second as his distorted features morphed into another expression, an unexpected one—a strange smile.  He was gleeful.  I’ll never forget that look, but as I recall it after so many years, I realize:  outrage feels pretty good.

In case you haven’t noticed, we are swimming in a sea of outrage these days.  Years ago when this incident occurred, it was perhaps only knee deep.  But as a result of social media and some other factors, the heightened political atmosphere is now a tsunami of outrage, a social cataclysm that threatens to sweep us all away.  We know that.  We feel the division.  And yet, we continue to indulge.  Why?  As I said, there is something about outrage that feels good, and is so enticing.  We have become outrage addicts, finding any excuse conceivable to become enraged.  Do these things really warrant that level of emotional fragility, and are there things that do deserve outrage?  For instance, what kind of things outraged Jesus?

In the book of Luke, the author records that Jesus chose to heal a woman with chronic back problems on the Sabbath, in front of the entire synagogue.  The ruler of the synagogue became indignant, outraged at the effrontery that Jesus displayed.  He spews out his complaint.  Why couldn’t she have been healed any other day of the week?  Why break the Sabbath to heal her?  It was the principle of the thing.  That may seem strange to you or me, but the things that cause other people to become outraged often do seem overblown to us; for him, it felt justified.

Interestingly, the synagogue ruler directed his comments to the crowd that was gathered, and not to Jesus.  And isn’t that just the case with outrage?  We engage anyone who will listen, instead of going to the source.  There is a good reason why social media has become the perfect platform for outrage.  Indignation of this kind is always directed to the crowd, and what is social media but a crowd, a multitude of “friends” at our disposal?  We aren’t trying to start a discussion or solve some problem.  No, we are venting.  Why?  Because outrage is often all about us.

Underneath outrage is hidden this interesting sense of entitlement.  Have you noticed this?  We feel that we have the right to be outraged, as if an injustice has been done to us personally.  Someone has crossed a line to which we feel entitled.  Maybe for you that line is not whether someone was healed on the Sabbath.  But it might be traffic etiquette.  It might be how someone disciplines their children.  Or whether someone came across the border illegally.  When you feel indignant about something, it is sometimes because a rule that you observe—a rule that you treasure—has been broken.  “I came to this country legally; why can’t they?”  Exactly.  So if that is the case, then outrage is about you.  Outrage is all about proclaiming your righteousness to the crowd.  And that is why outrage can become so addicting.

An antidote to outrage

Jesus shows us another path in this story, a story that I find to be one of the most heart-warming of the entire gospel.  As he is teaching in the synagogue, he sees a woman who has suffered with a back affliction for eighteen years, an affliction so severe that she is bent over and can “in no way raise herself up.”  He interrupts his teaching, lays his hands on her, and immediately, she is healed.  In fact, the author uses a form of the Greek verb “to loose” to describe it.  Why?  Because Jesus has liberated her from a life of captivity to her condition; Jesus has set her free.

The author writes that Jesus saw her there, but he did more than just notice her.  Jesus really saw her, meaning that he absorbed her story.  He looked deeply into her life, and experienced that captivity.  He saw her as a child when she was still able to run and play with the others.  He saw her as a young wife and mother when she began to experience the pain, even as she cared for others.  He saw her anxiety and fears for the future as she grew more and more debilitated.  He saw all of her eighteen-year captivity in a moment.  She was not just an object for him to heal; she was a human being with a story.  When Jesus saw her, he saw her story.

There is an antidote to outrage, and it has to do with truly seeing people—seeing them as Jesus did.  An older homeless lady lives just down the street from us, and sleeps under the arches of the old-style bank building.  She has a grungy old quilt, yet she folds it neatly beside her, which means she still remembers the days when she could put it away in a proper linen closet.  On her finger is some kind of cheap ring, which means that somewhere inside she has the desire to look beautiful again.  And she sits on that curb in an unusual way, not cross-legged as you might expect, but knees together as if she is a perfect lady sitting in a chair.  Now, I could look at her through the lens of the convenient categories—drug addict, loafer, lunatic—but I wouldn’t really be seeing her whole story, would I?  I wouldn’t be seeing her.

When you dignify someone by trying to see their whole story, compassion can begin to change the way that you regard the world.

But wait a minute, you say—if you have been following along.  If outrage is so wrong, then why does Jesus himself become outraged in the very next verse?  He turns right around to the ruler of the synagogue and calls him a “hypocrite.”  That critique is the sharpest rebuke that Jesus saves for his religious critics.  He goes on to explain:  “Does not each one of you on the Sabbath loose his ox or donkey from the stall, and lead it away to water it?  So ought not this woman, being a daughter of Abraham, whom Satan has bound—think of it—for eighteen years, be loosed from this bond on the Sabbath?”  Jesus is not being subtle.  The ruler saw the woman as less valuable than an animal.  In his eyes, she had no story.

The thing is, Jesus also saw the ruler—saw his story—and cared about him too.  He saw him as a child born into a family of religious privilege, something that he never earned.  He saw him growing up and treasuring the rules—everything black and white with no exceptions, except his own.  He saw him being promoted to his current position, crediting it to his righteousness and diligence, and not his father’s influence.  Jesus saw all these things and chose to heal the woman at that moment so that the ruler could see himself.  He wanted him to experience compassion for her.  He wanted him to get a better idea of what true righteousness looks like.

There were things that made Jesus outraged, but very often, they are not the things that outrage us.  What are they?  I think the words of Psalm 37 say it best:  “For the Lord loves justice, and does not forsake His saints.”  When Jesus became outraged, it was very often on behalf of others.  Outrage wasn’t about his own righteousness, as it frequently is with us.  Rather, it was about people, and the fact that God never gives up on us.  He sees our whole story.  Ultimately, you don’t know the injustice that forces that person to sleep on the street day after day, or that foreigner to cross the border, or that man to drive offensively.  As Jesus said to the religious people of his day, “Woe to you…[who] have neglected the weightier matters of the law: justice, mercy and faith.”  He was outraged by a different category of things.

The dent remained in my car door for a long time, and every time I opened the door, I remembered that incident.  For a long time, I felt outrage.  That man had crossed the line.  And yes, there are things in the world that deserve outrage, and that cry out for justice. But honestly, I can’t live in that place all the time.  I don’t want my spirit to become twisted by outrage, so I began to imagine his story.  Why was he in such a hurry?  Maybe he had been surprised with a pink slip the previous Friday, and was late for a job interview he couldn’t miss.  Maybe it was the wrong time to lose a job, because his wife had filed for divorce.  Maybe he was running late because he had been pulled over for speeding.  Or maybe he just wanted my space.  But thinking about this changed me, and maybe that is what matters the most.  When you dignify someone with a story, it can change you deeply.