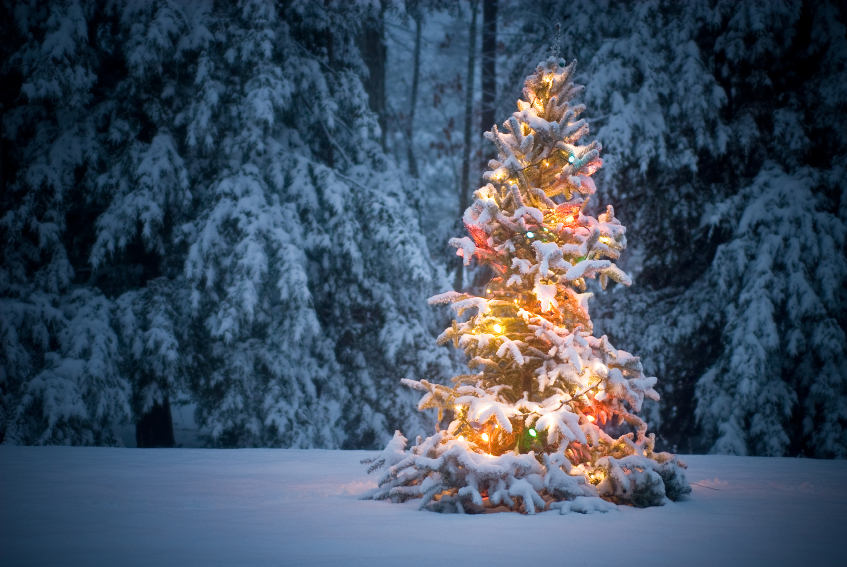 There is a beauty in Christmas boxes.

This Advent season, I sit at my desk in the living room near a roaring fire, rain pouring outside, and I survey the scene inside.  The holiday tree has been lovingly decorated and the stockings hung by the chimney with care, but three lone boxes are stacked there in the middle of my living room, emptied of their contents, each one labeled “Christmas decorations.”  These unpretentious containers are portals from which all of the festivities parade.  They are normally invisible to the naked eye, as feverish with excitement we exhume the contents into the rarified air.  And what they have in common is that they have each been repurposed to contain our Christmas joy.

The first box is addressed to Earl Dwight Radmacher, my father, and it is from Harry and David, the fruit and nut company in Medford, Oregon.  It is a tall box and it is emblazoned with large letters that say “Royal Gift Basket.”  I read from the label that this was sent with love from “Reuben & Opal” and I remember the face-less couple that used to send gift baskets to my family every Christmas.  My brothers and I would pick through the pears and apples for the candy contained within, oblivious to the box or the senders.  I inherited the box from my parents—once used to hold their Christmas decorations—and so the word “Christmas” is written on the outside in my mother’s handwriting.  Now it holds mine.

The second box, simple and sturdy with hand-holds on the sides, is printed with the name “Bristol Farms.”  Bristol Farms is a gourmet grocery store located in the town of South Pasadena, where my wife and I used to reside.  When we were first married, we would buy our Thanksgiving turkey pre-cooked from that store, and because the boxes were so sturdy and useful, I would save them for storing the various items that newly-married couples quickly accumulate.  We started cooking the turkey ourselves quite some time ago, but the box remains.

The third box is long and narrow and reads, “Epson Photo Stylus 820 Ink Jet Printer,” and sports a photo of its contents on the side.  As I look at this box, I am trying to recall just how many printers have ministered to us since that particular printer gave up the ghost, and I would be hard-pressed to say.  I am also trying to remember if this is the printer that I hated and battled on many occasions, or if it is one that I cherished, and I can’t remember.  However, the box has still been pressed into service year-after-year, holding our many decorations.

These peculiar boxes represent the essence of Christmas for me, an odd conglomeration of histories and experiences, each with a unique story to relate about one life-changing, universe-altering, calendar-recalibrating figure: Jesus.

I have always felt the same way about the Christmas story itself—that it comes down to us in many different boxes, but each with something in common.  There are four in particular that we typically turn to for guidance:  Matthew, Mark, Luke and John.  Mark probably wrote first, most likely getting his information from the apostle Peter, and so he doesn’t talk about Christmas at all.  Matthew relates the story from the perspective of Joseph, includes the visit of the magi, and is always looking to see how Jesus might have fulfilled Scripture.  Luke, as the historian of the group, contributes all sorts of interesting historical details.  He spent a good deal of time with Mary, herself a devoted member of the early church, and so creates the fullest picture of the Christmas story.  John writes much later, commenting on what has already been written.

There were certainly many other versions of this story that I would love to hear, but which were never written.  I would love to hear from the innkeeper, a simple peasant who had a long night carrying hot water and clean towels back and forth to the place where the animals were sheltered.  He would focus on his role in the tale.  The shepherds would have a different version, roused from their sleep by a midnight manifestation, yet eager to leave their flocks and complete the journey to the nearby town.  They would have noticed things that were rough and earthy and that pertained to animal husbandry, like how many animals were gathered in that dark enclosure.  An unknown number of kings shared their travelogue and the strange encounter they had with a paranoid king Herod, but if they had written the story, it would have had a different character altogether.

Each of these stories contains details that the others omit, told through the lens of their personal story.  Over the centuries, others have added their stories, and to these, each of us adds our own.  Perhaps it is the diversity of lives that have been changed that makes the story truly special.

Each one of us who reveres Christmas is a unique box, stamped with leftover phrases and slogans from our previous lives; yet hand-written across these old markings, in the handwriting of the Holy Spirit is the same word, the same name, a Jewish name translated into Greek, yet anchored to the legends and prophecies of the Davidic kingdom:  Jesus.  Each one of us who welcomes Christmas contains the contents of the Christmas story, and it lives again every time that we tell this story, not just the story of the Nativity, but the story of the way that a Savior in swaddling clothes has entered our narrative and changed our lives.

That is the power of Christmas.  You see, we ourselves have become the story now, because it lives and breathes through us; we are the enduring power of the narrative.  We are those Christmas boxes that have been repurposed to serve the Savior and Redeemer of the world.  And as we tell THAT story—the story of a life radically changed—we find that there is indeed beauty in a Christmas box.