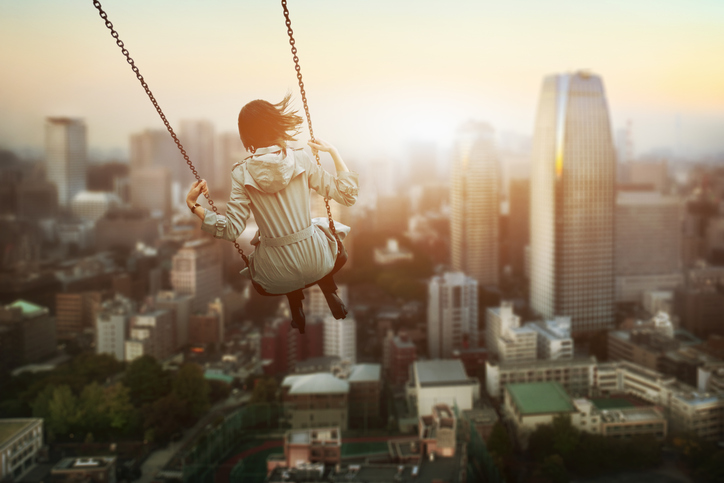 On March 4th, 1933, President Franklin Delano Roosevelt delivered his first inaugural address, in the midst of the Great Depression—a time of widespread unemployment and general despair—and in that speech was embedded one of the most iconic lines in any speech of any time.  In the midst of this time of turmoil and unrest, Roosevelt said, “The only thing we have to fear is fear itself.”  Now, on the surface, that is a great line.  It is an inspiring line.  It is a line that gives you hope.  And yet, in the moment, if you think about it, it was just absurd.  In a time of great economic uncertainty in this country and leading up to one of the most destructive conflicts of all time, we as Americans had everything to fear, and fear was maybe the least of those things.  What could Roosevelt have meant by that line?

Sometimes fear is more dangerous than the things that we fear. We all find ways of dealing with our fears—whether substances we abuse or legislation we enact or leaders we elect—but on occasion the cure is worse than the condition.  Our world is not so different from the world in which the Apostle Paul circulated, and yet, he suggests a wildly different response.  At the end of Romans 8, Paul asserts that we as Christians have nothing to fear, and gives three solid reasons for his seemingly naïve confidence, three freedoms that are based on the character of God.

1) The Freedom of Grace

When I was growing up, I had undiagnosed obsessive-compulsive disorder. I didn’t know it at the time, but I have realized it as I have looked back on my life and have started remembering some things that I had forgotten.  If you don’t know anything about this illness, people with OCD are gripped by inordinate, irrational fear in their lives.  As a result, they develop strategies to deal with the fear, rituals or routines that they feel compelled to practice as they go about their day.  These routines, while pacifying initially, easily grow into an all-encompassing prison, taking over your daily life and enslaving you in a catacomb of cruelty.

The classic example is the person who has to wash his or her hands repeatedly, maybe fifty or sixty times a day, because they have a phobia about germs. Others need to check things repeatedly.  When I was young, I had little rituals that I had to practice that had to do with symmetry.  If I happened to brush my right leg with my right hand, then I had to touch my left leg with my left hand—not just one time, but repeatedly.  That would happen on a regular basis all day.  I would have repeated thoughts as well.  I remember a whole week at summer camp when I thought every waking moment about blinking.  I worried about when I should blink, and if I ever might forget to blink.  It probably sounds funny right now, but think again.  It was a nightmare.  It scares me even now as I remember it.  I felt compelled to do these rituals—coerced or manipulated—as if something would go very wrong if I didn’t.  Not surprisingly, this condition is associated with an increased risk of suicide.

People have asked me how I got over it, and I’m not sure how to answer that. As you can imagine, I’m not really conscious of the exact moment, because there was no such time.  But I do remember sort of giving myself permission to stop.  I didn’t want to live that way anymore, and so I gave myself a gift.  I gave myself grace.  I think at that moment, the compulsion began to go away.  I was set free.

Paul says something similar in Romans 8: “He who did not spare His own Son, but delivered Him up for us all, how shall He not with Him also freely give us all things?”  This word that is translated “give” is a familiar word in Greek and one of Paul’s favorites:  “charis” or “grace.”  Grace is unmerited favor.  Grace is a gift.  As I realized that I was held in hands that were so much bigger than mine, I felt the chains fall away.  We have freedom from fear because of God’s grace.

2) The Freedom of Mercy

One of the aspects of OCD is the hiddenness. There is great shame and I guess self-loathing that is involved in these routines, and so the person with this disorder will never want you to see the things that they go through to control their fear.  The person who washes his hands repeatedly does so in private.  The person who wants to check things repeatedly does so in a clandestine way.  I would try to be so subtle with my routines because I knew how crazy they were, and I felt intense shame and desperation.  I suppose many addictions are this way.  The alcoholic hides his flask and the voyeur his pornography.  Privacy is necessary because of the shame.

When I was in college—long after I had forgotten about my disorder—I remember visiting my older sister in Phoenix. Rebecca had gone away to college when I was still a young boy, and I had written her letters, letters which she had saved.  When I visited her many years later, she pulled out one of the letters and showed it to me.  I expected to see the typical ramblings of a pre-teen boy, but instead, I found that I had confessed to her my little secret, the details of my agony, in the awkward way that one would expect from a young child.  As I stood there, a grown man with my sister reading over my shoulder, I felt ashamed once again.  I felt exposed.  I felt naked.  I had forgotten, but the shame and disgrace was as present as ever.

We have freedom from fear because of God’s grace, but also because of His mercy. That is the second point that Paul makes in Romans 8.  Paul asks, “Who can bring a charge against God’s elect?  It is God who justifies.  Who is the one who condemns?  It is Christ Jesus who died, but even more, has been raised.”  We all have a basic human need to approve of ourselves and for others to approve of us too.  We live in constant fear of not being approved, and that urge drives us to hide and cover who we really are.  But Jesus welcomes us to come out of hiding, because He has taken away the shame.  He took our weaknesses upon Himself when He hung upon the cross.  We no longer need to hide and cover at all.

When you give yourself over to God’s mercy, I think that you find the shackles of fear falling away in so many areas. How else did the martyrs die so courageously and live so forgivingly?  The example of mercy that was demonstrated for us at the cross goes before us and changes how we live our lives.  The way that we forgive and accept ourselves transforms the way that we forgive and accept others.

3) The Freedom of Love

Some years later, I went to see a therapist for some issues that I was having. I mentioned that I had undiagnosed OCD as a child, but that I had conquered it.  I felt proud of that accomplishment, but he told me something that was startling and revealing.  OCD never goes away.  If you stifle it in one area—if you learn to stop certain routines or rituals—it will crop up in another.  And that is the bottom line.  Part of me was devastated when I heard that, but part of me was also freed.  I will always struggle with certain urges.  I will always want to check that my car lights are off five or six times.  Even as I compose this blog and see these words on this page, it pains me when the paragraphs don’t align just so.  And I am sure that I will discover even more routines that are tempting for me to indulge.

But I disagree with that therapist in this one aspect. I think that love opens the door of that prison and sets me free from having to pursue those things.  It keeps me from being enslaved by the fear.  It says that I have nothing to fear.  Why?  It says that I am loved, not in spite of who I am, but because of who I am.  That is a world of difference.  In most relationships, we love someone, yet put up with all of their idiosyncrasies.  In a relationship of real love, you love someone, not in spite of those things, but because of them.  You embrace a whole person when you love them with your eyes open to their fears.  That is how God has loved us.  The first kind of love is a prison, but the second kind of love is incredibly freeing.  It is the only love that is worth having.  We have true freedom from fear because of love.

My five-year-old daughter has a little bunny that we gave her at birth, and that we named Tickleberry. It is not a cute, fat rabbit, but an emaciated and floppy one, a little more like Bugs Bunny than the Velveteen Rabbit.  Well, if you look closely at Tickleberry, you will see that one of the ears is brown and that most of the fur has been rubbed off.  Whenever my daughter is frightened, she rubs that ear between her thumb and forefinger.  It must be that ear and no other.  Now, ask me how I feel about her loving that bunny in that way.  Does it make me love her more or less?  Moreover, how am I going to help her through this passage of fear?  I believe that we have an example in the gospel as expressed by Romans.

Paul ends the chapter with the most sweeping statement of God’s love, the most profound example of what I have described: “I am persuaded that neither death nor life, nor angels nor principalities, nor things present nor things to come, nor powers, nor height nor depth, nor any other created thing shall be able to separate us from the love of God which is in Christ Jesus our Lord.”

And so I did what Paul did in this passage at the end of Romans 8. I wrote down my greatest fears—the things that make me shudder to even think of them.  That is what Paul does here, you know?  He makes a list of his greatest fears—things that he had already experienced to some degree.  At the top of my list would have to be the possibility of something bad happening to my kids—being kidnapped, molested or murdered.  Even writing them down was frightening because it gave them a new power in my heart.  I wrote down my top three fears, and then drew a line through them and wrote next to them the following:  the love of God.  And it changed me because I was replacing the human fear with the divine love of the gospel.

We have freedom from fear, not because we can control our fears or learn new habits to dismiss them, but because we remind ourselves on a regular basis of who God is and what He has done. In that world, we truly have nothing to fear.