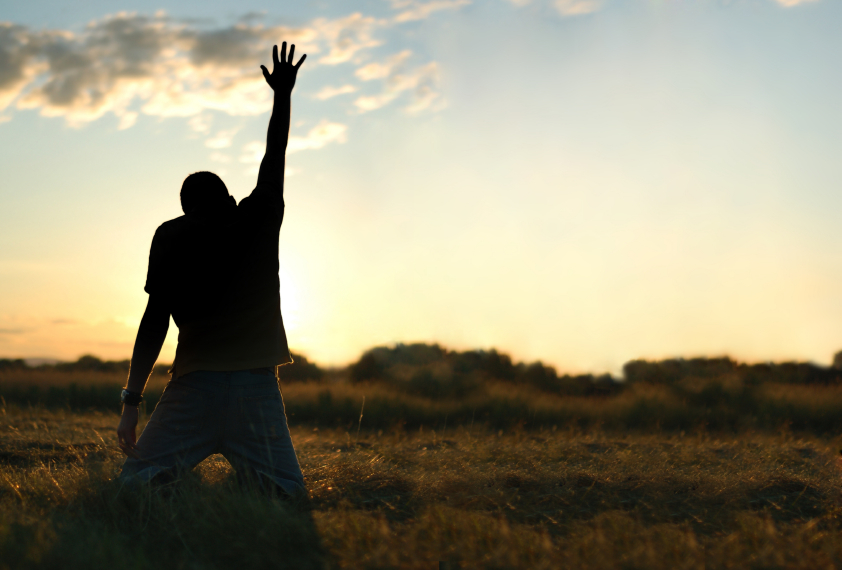 Every winter for many years, my wife and I have taken a trip north from our home in Pasadena to the community of Mammoth Lakes, California to enjoy a ski weekend together. It is about a six hour drive, mostly through a barren and wind-swept plain featuring towns like Lone Pine and Bishop.  One hour north of Los Angeles is a town called Mojave, populated primarily with gas stations and truck stops.  There is no reason why you’d know this bend-in-the road town except for a sign that reads “Welcome to Mojave.”  But the back of the sign has another message, a somewhat surprising one:  “If my people will humble themselves and pray, I will heal their land.”

Now, I know nothing about the history of this sign, but I do know a little something about the quotation. It is taken from the Old Testament, and it is perhaps one of the most quoted verses in the entire Bible.  Solomon has just been crowned king, and God warns him about judgment that will come if the nation disobeys.  The actual verse reads, “If My people who are called by My name” and stipulates that they “turn from their wicked ways.” Judgment, in this case, amounted to drought and famine that would come over their land. Interestingly, people like to borrow this promise for themselves when they hope for healing in their lives, even though it was meant for Israel, not Mojave.  But it raises an interesting question.

Does God judge nations today?  Are there things that a country might do which would bring God’s judgment on their community?  Do we share the consequences of one another’s choices as a people?  Undeniably, this is true on a smaller scale.  The mismanagement of a company impacts the financial stability of its employees.  The carelessness of one camper sparks a massive conflagration that reduces homes to ashes.  The affair of one spouse destroys the home-life for his or her children.  It may seem unjust, but we are linked with one another for better or worse, regardless of culpability.  Is the same true of a country?  Is a nation judged because of the faithless choices of a few, and if so, can the faithful choices of a few bring healing to a land?

When you sit down and read through the Old Testament, you find that it is largely the story of how God founded a nation and how He eventually came to judge that nation. It was a long process and didn’t happen all at once, but as a result of a series of choices that the people made.  From their demand to have a king to the decline that came under progressively worse leadership, it seems like they inched towards the judgment that would come in the exile in Babylon.  And the further you read, the more you sense the patience of God growing thin as the story progresses.  It is palpable in the warnings that are issued and in the escalating language, until finally they hit a “tipping point” of judgment.  I believe that tipping point comes in the book of Jeremiah.

Jeremiah was a prophet who ministered during the fall of Jerusalem in 586 BC. He witnessed the conquest by Egypt, the struggle with Nebuchadnezzar of Babylon, the grisly siege of Jerusalem, the exile of the people and perhaps the razing of that city and her temple.  He records this message, a fascinating kind of ultimatum from God:  “The instant I speak concerning a nation…to pluck up, to pull down, and to destroy it, if that nation against whom I have spoken turns from its evil, I will relent of the disaster that I thought to bring upon it.” He continues with the same tipping point only in reverse.

What I find so interesting in this statement is how very broad it is, and how it represents a general truth about how God deals with “a nation.” Certainly, the nation of Israel was a chosen people who had a covenant with God.  But the Bible is filled with other nations who also experienced judgment.  Most children could tell you the story of Jonah, but no one ever thinks to ask why the Assyrian city of Nineveh was being judged at all.  Of what wickedness were they guilty?  What is the tipping point of judgment?

There is an incredibly interesting piece of the story of the fall of Jerusalem that is probably not well known. When Nebuchadnezzar sent thousands of people into exile in Babylon in 597 BC, he placed Zedekiah on the throne of Jerusalem as his puppet king.  Just eight years later, Zedekiah led a rebellion against Babylon, and Nebuchadnezzar responded mercilessly.  He laid siege to Jerusalem for several years.  It was a gruesome experience, and when the city fell, Zedekiah was blinded and taken away.  But before that happened, he came to Jeremiah for counsel, and here is what God said to him.

“‘Thus says the Lord: “Behold, I set before you the way of life and the way of death. He who remains in this city shall die by the sword, by famine, and by pestilence; but he who goes out and defects to the Chaldeans who besiege you, he shall live, and his life shall be as a prize to him.  For I have set My face against this city for adversity and not for good,” says the Lord.”

Unfortunately, Zedekiah would not listen and did not surrender. What this means is that as far as judgment is concerned, leadership matters.  I am sure that Zedekiah curried favor among the people.  He most likely gathered their support by appealing to their nationalism and distaste for foreigners.  Why, it wouldn’t be hard to convince them that they should rebel.  After all, was not God on their side?  Weren’t they His chosen people?  He probably reminded them of the good old days when David reigned and they enjoyed prosperity.  But when the Babylonians came knocking, his leadership was a disaster.

If you support a leader who is reckless and who worships power and not humility, who won’t listen to wise counsel and who does not seek the Lord, then you are going to be in for trouble. Very often, a nation is judged when its leader refuses to be accountable to God or anyone else.  It was the pattern that was played out over and over again in Judah and Israel.  If you treasured the strength that he promised and believed his lies, you should reconsider.  However, what if you didn’t support that leader, and yet—like Jeremiah—are suffering the consequences with others as if you had?  What then?

3) The Truth about Healing

The most refreshing and yet heart-rending piece of the book of Jeremiah comes near the middle, where he pours out the following cry of his heart to his God: “Heal me, O LORD, and I shall be healed; save me, and I shall be saved.”  Jeremiah makes the same appeal for healing in his own life that you or I would make.  You see, while we are able to analyze this book at a safe distance, it is easy to forget that he dwelt in the middle of the chaos and hell that he described.  He knew a culture that pursued anything that promised to satisfy.  He sparred with terrible leadership who sought his counsel but then refused to listen.  He suffered imprisonment and felt the pangs of starvation as he lived through that siege.  And he ended up fleeing to Egypt with the survivors and probably lived out his days in exile from his own country.

In the midst of that terrible siege, however, he could offer a glimmer of hope to his desperate neighbors in the words that he wrote: “Through the Lord’s mercies we are not consumed, because His compassions fail not. They are new every morning; great is Your faithfulness.”  Jeremiah was coming to know something about how to think about healing while in captivity.

Honestly, I think that what we value most in America is freedom, as if it is godliness. Liberty is like our national religion, it is so close to the American spirit.  When we pray for healing, we think in terms of freedom.  But I don’t know that God values freedom in the way that we do.  In fact, I think that the greatest works for the kingdom of God have actually been completed, not in freedom, but in captivity.  Freedom is more likely an idol of our nation that we have conflated with our faith, and that has led us to treasure things that are not the things of God.  I don’t really know if God values freedom, but without a doubt, I know that God welcomes faithfulness.  When we find ourselves praying for healing, maybe we should pray for faithfulness.

Maybe you are living in a Jeremiah situation, sharing the consequences of someone else’s decisions, with no voice whatsoever. Maybe it is related to the leadership of this nation and the way that America seems to have lost its way, and it makes you want to shout and scream on social media to be heard.  Maybe it is due to the decision of your spouse to be unfaithful to you, and so you are living with the prison of a life that you never would have chosen.  Or maybe it is the result of decisions that your children have made on their own, but you are having to live with their choices as if they were your own.  You feel like you are in captivity and need to be freed; you long for healing.

In the midst of your situation, resist the temptation to pray for freedom; instead, pray for faithfulness, and healing may be what you receive.