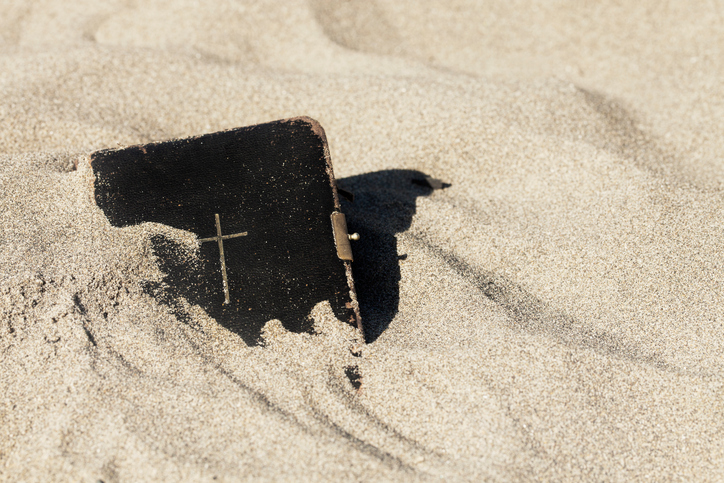 If you’ve ever read the Bible straight through, you know it’s an interesting trip. Genesis starts out easy enough.  It reads like a parable—almost like a children’s story—about how the world began and developed.  Soon enough, it becomes the story of a really dysfunctional family, and it gets worse from one generation to the next.  It’s like watching a train wreck.  Exodus is pretty exciting at the beginning—with Moses, Pharoah and the exodus—but it gets strange as you get into the Law.  For example:  if you beat your slave and he dies, you are to be punished, unless of course he lives for several days, in which case you’re alright—he’s your property.  It gets weirder in Leviticus.  If a woman gives birth to a baby boy, she is unclean for just seven days, but with a baby girl, it stretches to two weeks.  Huh?  And you can be executed for almost anything, including adultery or cursing your parents.  How in the world is this stuff in the same book as Jesus and the gospel?

The recurring problem that we run into in this day and age is trying to reconcile what we find in the Old Testament with what we find in the New Testament. The two halves of the Bible seem almost unrelated, as if a different god is operating in the background.  A typical response is often to ignore those things, or to claim that they don’t apply to us today.  But that is really unsatisfactory, and everyone knows it.  So along comes Jesus, and we expect Him to represent more modern views, and yet, He doesn’t really seem to go there.  In fact, He says two really shocking things about the Old Testament at the beginning of His ministry, things that don’t appear to fit with our expectations.  How can we possibly reconcile the God of the Old Testament with the grace-filled and loving Jesus that we have come to know?

In the way that people handle the Bible today, they often want to “destroy” it without realizing it, and this is particularly true of the Old Testament. Well, Jesus says something really shocking: “Do not think that I have come to destroy the Law and the Prophets.” Notice how He addresses the assumption that was already there in the room.  The Pharisees and religious leaders were geared up for Jesus to throw out the Old Testament, and that was a major threat to them.  Today, we have a very different problem.  Truth be told, we would probably love for Him to have thrown out the unseemly parts of the Law—the sections that seem irrelevant or offensive to us today.  We would love for Jesus to be the guy that we have imagined.

The word “destroy” here really has the idea of “repeal and replace,” which we are familiar with today in America because of Obamacare and the efforts in Congress to get rid of it. We repeal and replace a law because there is something inherently wrong with the existing legislation.  But that is not Jesus’ attitude here.  He is not looking down his nose at the Law or the Prophets, as though they are outdated.  Why?  He didn’t come here to repeal and replace the Law, but to fulfill it.

Here is the problem: you don’t destroy something if you are going to fulfill it. The Law and the Prophets didn’t need to be repealed and replaced.  Jesus didn’t abolish them because He intended to accomplish them, or literally, to bring them into being as a child comes into being.  The Greek there is the basis of our word “genesis.”  It is the pregnant promise that will only be fully and finally revealed in him.  He goes on to say that not one letter or piece of a letter will pass away until it is “birthed” (so to speak).  Tim Keller says, “Jesus’ view of the Bible is so high it gives me a nosebleed.”

Some time ago, I was singing the Bach St. John Passion with a large choir at a church in downtown Los Angeles. Before the concert began, the pastor stood up and gave a kind of disclaimer—that this is a masterpiece of music, but that we are much more enlightened now than when it was written, and we ought to listen with that in mind.  Now, I understand what he was attempting to communicate.  He was trying to say that the Bible was addressed to a very different culture with different foundations.  I get it.  There is no question in my mind that the Bible contains truth that has been incarnated in extremely cultural garb.  But his underlying message is troubling:  the Bible has value as a cultural artifact, but with no real abiding truth.  The meaning that we find inside is rather the meaning that we bring to it.

That is problematic. I’m not sure how you follow Jesus as Savior and yet reject what He himself believed about the Bible.  You can’t have it both ways, can you?  You don’t destroy something if you are hoping to see its promises fulfilled.

Perhaps our biggest problem with the Old Testament—the thing that prevents us from reconciling the two halves of the Bible—is that we deeply misunderstand and gravely underestimate the holiness of God. We always have.  Jesus makes another statement that should be even more shocking.  “Unless your righteousness exceeds that of the scribes and Pharisees, you will by no means enter the kingdom of heaven.” Now, the Pharisees have a bad rap today because we see them all as hypocrites, though not all were. They were serious about holiness, but some misunderstood the Law.  They thought that if they could avoid the obvious sins and accumulate enough good works, then on balance, they’d be alright with God.  Who among us hasn’t felt the same way?  We judge ourselves on balance as being alright with God.

Bottom line: we misunderstand something about holiness. It isn’t about how small or innocent your mistakes are, but about how absolutely holy God is.  We’re not the standard—God is.  Jesus makes this incredibly sweeping statement:  “You shall be perfect just as your Father in heaven is perfect.” Who could ever achieve that?  Exactly.  The Law isn’t primarily about our holiness, but about the holiness of God.

Why is Jesus important to the whole of the Bible? Because Jesus makes a relationship with a holy God possible. If holiness is not an issue, then we don’t need Jesus at all.  Without the backdrop of the Old Testament, then the purpose of Jesus is simply to teach us how to live and how to love one another.  He is purely a moral example for us to follow, like Gandhi or the Dalai Lama.  In that case, “love wins.”  But that was not Jesus’ idea about Himself.  Jesus came here to pay the debt of our sins on the cross.  Moreover, the righteous life that He lived was credited to me by grace.  It wasn’t just about a good moral example; it was a rescue.

When I was a very little boy, I was toddling around on the deck of a swimming pool while most of my family splashed around in its depths. I guess I decided that I wanted to join them, even though I couldn’t swim, and so I plunged in.  My dad, quick as a wink, dove into the pool to rescue me.  Imagine if instead of jumping in, he had decided to try to teach me how to swim from the side of the pool?  As I’m going under, he is saying, “No, Dan, you need to kick your legs like I am doing.”  It would be wrong to treat a drowning person that way.  That is not what Jesus did—He didn’t come just to be a moral example for us, but to rescue us.

3) Wrestling with the Scriptures

How do I handle the Old Testament? I don’t treat it as “flyover country” in my devotions.  I don’t attempt to nuance the meaning of those embarrassing parts with creative interpretation so that the words don’t mean what they seem to be saying.  I really want to see the heart of God revealed in the Old Testament as much as in the New.  But I try to remember something:  Jesus only makes sense when against that backdrop.  I can’t make Him something other than what he was.  I can’t make Jesus all about love and forgiveness, as nice as that sounds, while simultaneously tearing away the righteousness and holiness embedded within the Law.  You see, grace is only meaningful when it is against a backdrop of the absolute holiness of God.

And so I wrestle—yes I do—but it doesn’t keep me from reading and it doesn’t keep me from following. Instead, when I read the really difficult parts of the Old Testament—like when Abraham is asked to sacrifice his son in Genesis—I say the following to myself:  “God is not like me.  God is on a completely different plane.  The things that are important to God are not always the things that are important to me.  I want to know this God, this God who gave His Son to rescue me.  Because it is only through the cross—only through grace—that I can possibly attain to that holiness.”  The holiness of God is what makes grace so very meaningful.