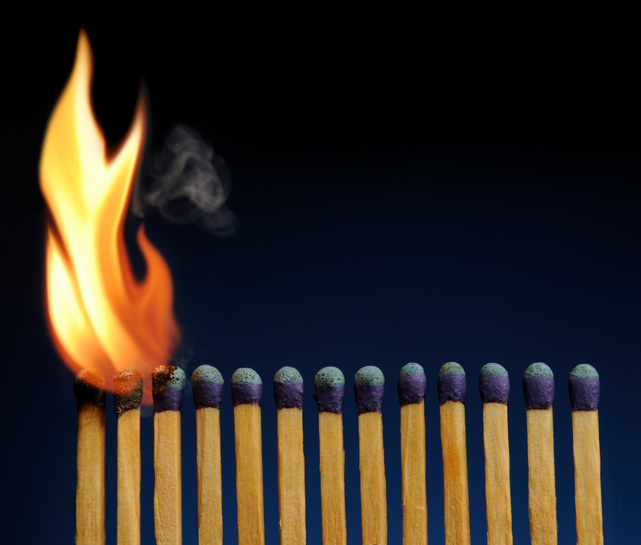 “It’s not personal; it’s business.” Many of us have heard that phrase, but some may not know where it comes from.  That line belongs to The Godfather, the 1972 blockbuster by Francis Ford Coppola, which pictured life and business in a Mafia crime family in the second half of the 20th century.  The idea is that your misdeeds are somewhat excusable because they are disconnected from any anger you might have towards your adversary.  Throughout the movie, however, we find ourselves asking, “Is this really not personal?”  The climax comes when crime boss Michael Corleone becomes godfather for his nephew.  We hear him audibly “renounce the works of Satan” in a baptismal ceremony while his minions one-by-one routinely murder his adversaries, including his brother-in-law.  The ebony eyes of actor Al Pacino seem cold and dead, like the eyes of a shark, as the camera mugs his face, straining to detect any emotion.  The thing is, it just isn’t true.  As the movie and its sequel progress, we find that it is deeply personal.  As Michael ages, we are allowed to witness the hate that is bottled inside of him consume his heart.

There is a lot of talk about hate in this day and age. It seems like just disagreeing with someone can get characterized as “hate” in our world.  A differing opinion is treated as black and white, right or wrong.  And yet, I doubt that many would agree that they hate someone else, because hate is politically incorrect.  We might deeply disagree but we never harbor resentment or rage, do we?  We might feel anger but we never hate.  It isn’t personal.  Really?  Well, when does anger become hate?

Jesus had something to say about this subject. In the first major sermon of His ministry, Jesus called for a deeper righteousness than we could muster on our own.  He argued that the kingdom of heaven is first and foremost a kingdom of heart, and so a heart prepared for the kingdom is one that has been supernaturally changed.  It turns out that in the kingdom, everything is personal. Anger really matters.

1) The Problem of Anger

The problem of anger is a problem of hate. In the Sermon on the Mount, Jesus expands the idea of righteousness to something that is deeper than behavior.  He shockingly compares being angry at your brother to breaking the commandment against murder in the Mosaic Law.  “But I say to you that whoever is angry with his brother shall be in danger of the judgment.” (Some translations include the words “without a cause,” but that isn’t found in the oldest manuscripts, and was likely added later.)  The definition of murder was premeditated killing, “lying in wait” for someone.  Our actions don’t often happen in a vacuum or at random; our behavior springs from the inside.  Hate of some kind is usually what gives rise to first-degree murder.  So Jesus is saying that when you hate someone, you are killing them in your mind, even if you never actually pull the trigger.

This past election season, there was a lot of hate going around on both sides. In fact, I had to get off Facebook for a while, because surprisingly, I was finding the capacity to hate being nurtured within me.  I remember listening to one particular pundit on the news, and saying to my wife, “I just want this election to be over so that she’ll go away and I won’t have to see her again.”  In effect, I was killing her in my mind.  When we are angry at a brother—someone with whom we’ve had a relationship—what do we do?  We withdraw.  We distance ourselves.  We try to create a world in which they never existed.  We murder them in our minds.

How does anger become hate? Here is the crux of the issue: unaddressed anger tends to become hate. That is the heart of this passage.  When you don’t deal with a conflict that has arisen in a relationship with a brother in a healthy way, then you create a little world in which hate thrives.  When you try to push it down or ignore it—when you withdraw or distance yourself from them because of what they have done—then you fashion a cauldron out of your heart which will boil and bubble over with each reminder.  Anger which goes unaddressed is hate in disguise.

Micro-aggressions reveal an inner world of hate. When you are holding onto anger, insulting your brother becomes your reflex.  It is a passive way to ask for change.  Haven’t you found this to be the case?  When you are angry at someone, don’t you find passive ways to criticize them?  Doesn’t your teasing start to get a little more aggressive?  Don’t you find yourself going there instinctively?  Teasing has become a socially acceptable way to ask for change in others without directly addressing it.  Micro-aggressions are a symptom of anger morphing into hate.

Jesus gives two examples of aggression, first century equivalents of name-calling: “Raca” and “Fool.”  But the point is not the words, but the extreme judgments that are then passed.  When we see ‘hellfire” in the Bible, we frequently think of eternal punishment.  But in the Greek, we find something deeper and more profound.  The word is Gehenna.  It was the valley of Hinnom next door to Jerusalem where all of the garbage was dumped and burned.  The result was a landscape that was forever on fire, a smoldering wasteland.  When you hold onto anger in your life, then it is like your heart becomes a smoldering wasteland of hate—a ruin of potential.  If you leave anger unaddressed in your life, I can guarantee you Gehenna.

2) The Remedy for Anger

Anger must be directly addressed, but this is where it gets complicated. There is not always the opportunity to address things with someone.  They might refuse to meet with you.  They might want to withdraw instead.  I have that situation in my life right now with friends who are angry at me.  Or you might have anger towards someone with whom you cannot be reconciled, like a dead parent or relative.  You might be angry against someone that you can’t know—like the government or an institution.  It is complicated.  So Jesus gives two examples—a conflict with a brother and with an adversary—as a starting place to think about resolution.

I love the fact that the first example is placed in the setting of worship. He says, “Leave your offering at the altar and first be reconciled.”  Worship is very popular these days, but I find that there is also a lot of misunderstanding.  We tend to think that what God wants in worship is our performance.  We put a lot of resources and energy towards getting the offering just right.  But the offering that God desires is actually a heart unencumbered by grudges.  When you don’t address anger, then it threatens to suck up all of the spiritual space that is meant for Him.  It takes over your life.  You can’t give your heart to God when you’ve given it to a grudge.

I’ll always remember the first time that I led the song “Good, Good Father” in worship.  A few days earlier, I had accidentally hurt my seven-year-old son—not physically, but emotionally.  We had been fooling around, but I had taken it too far and hurt his feelings.  I began to just weep in the middle of the song because I was so grieved that I had not been the kind of father that God had been for me.  Maybe the reason I was so emotional, however, was because I thought of my own father.  We spoke on the phone several days before he died and he told me that he loved me, but it was the first time in a decade.  And so in that magnificent moment in worship, I realized that I wasn’t a good father either.  I failed.  I needed grace.

Ultimately, we address anger by acknowledging grace. We invite kingdom values to overwhelm and saturate us in every way possible.  We cannot walk around with unaddressed anger in our hearts, because the grace and mercy of Jesus is so much more powerful than all the grudges we could carry.  We must invite the purifying and healing presence of the Spirit inside to radically change us with the gospel.  I had a debt that I could not pay; Jesus paid a debt that He did not owe.  When we have been forgiven so great a debt, how could we hold possibly hold a grudge?

When I feel anger building towards someone, I begin to pray for that person. That is the starting point.  If I can’t address them directly—if there is nothing else that I can do—I can still ask God to change my orientation.  You can’t hate someone and pray for them—not really.  Love will begin to replace hate in that prayer.  And as I pray, I bathe my mind in vivid mental images of the grace and love that was shown to me by Jesus, and the debt that was paid on my behalf.  What needs to happen in my heart is that I need to see and understand myself as just as great a debtor as the person for whom I am praying.  It is the way that a supernaturally changed heart occurs—it happens by degrees as the Spirit opens up spiritual space within me.

Unaddressed anger is changed by grace.