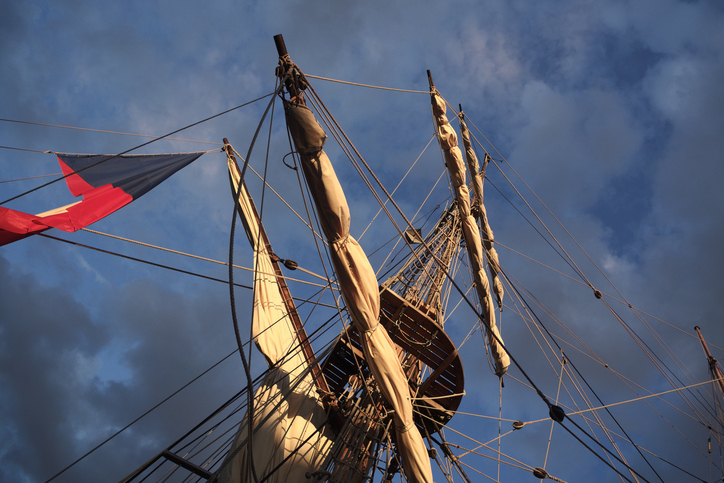 The ship rolled and pitched underneath us as we crouched in the dark between decks, clinging to one another, the bulwark, our luggage—anything to keep from getting thrown on our faces again with every mountainous wave. The maelstrom roared outside—the howling of the wind eclipsed only by the smashing of breakers against the rickety hull of our tiny vessel.  Outside was pitch black.  The only light was made by tiny candles that swung in ornate, tin lanterns from the low beams on which we’d hit our heads hundreds of times.  Everything in sight was moving.  Not one of us had escaped seasickness that dreadful night, and so far, we’d been unable to keep the pails of vomit upright.  Filth flowed freely from one side of the cabin to the other with every ascent and descent of a wave, and we tried to dodge it without much success.  The stench was almost unbearable.  One of our number climbed on deck to escape the brutal conditions, but not being a seaman, was swept overboard immediately.  Fortunately, the crew rescued him, but not before almost drowning.  The captain had decided to lie ahull in the storm, which meant that he took in the canvass and locked the tiller to leeward, abandoning our boat to the mercy of the storm.  Mercy is not a category for a storm.  As I crouched there, shivering and terrified in that leaky coffin, all I could think was, “What were we thinking?”

It is interesting today that we call the inhabitants of the Mayflower “pilgrims” because on some level, they were nothing of the kind.  A pilgrim knows where he is going.  A pilgrim has every intention of returning to her home.  A pilgrim seeks spiritual enlightenment on a journey, not a new residence.  The reason that we call them pilgrims is because they shared what all pilgrims share—a secret knowledge that causes them to make choices that might seem bizarre to you or me.  Pilgrims journey because they know something that others do not.  What do they know?

1) They know that this place will never be home.

Longing will tell you something if you stop to listen. If you can dig down deep enough to access your true desires—past all the superficial longings like the latest flat-screen television or a wardrobe with jeans that are just skinny enough—they’ll reveal something that is lurking underneath, in the mysterious depths of your spirit.  It is a longing so secretive that it often hides in the background, but as you begin to frequent this region, you’ll find that these desires are beckoning to you more often.  They are whispering something in a non-audible voice, something that you have always suspected to be true.  They say, “This place is not your real home.”

We are given a tiny glimpse into that secret place in Psalm 84. The psalmist exclaims, “How lovely is Your tabernacle, oh Lord of hosts. My soul longs, even faints for the courts of the Lord.”  His cry emanates from that deepest place.  Now when this psalm was written, the “tabernacle” of their wilderness wanderings had long ago been replaced by the temple in Jerusalem, but he returns to that nostalgia in the same way that we idolize Christmas past.  It was a most unique era in all of history.  God’s “shekinah” glory had come to live among them.  He didn’t touch down and disappear again as in centuries past.  He came to stay.  In all of their homelessness over forty years, God’s presence became their true home.

A pilgrim knows something intuitively: this place where I am living is not my home.  These things that I see gathered around me, with their shallow allure and empty promises are not my dwelling place.  I don’t belong here.  I am a stranger in this place.  And so a pilgrim is always searching for his true home.  The nearer you draw to God, the more you should feel uncomfortable in this world and suspicious of its promises.  The nearer you draw to God, the more you will know that there is a true home awaiting you.  Pilgrims understand that when we long for home, we are actually longing for the presence of God.  God is our true home.

2) They know how to travel light.

A pilgrimage will put you in a place of neediness. It is an intentional choice that you make regarding how you will live your life, and the level of deprivation you’re willing to experience for a better destination.  And so the psalmist insists, “Blessed is the one whose strength is in You, whose heart is set on pilgrimage.”  The pilgrim was forced to pass through the “Valley of Baca.”  Scholars don’t really know what this phrase means.  Baca may have been an actual place on the journey to Jerusalem, an arid, desert-like region where the pilgrim was hard-pressed to find water.  It might just refer to suffering in general.  Whether figurative or literal, it demonstrates a truth that travel of this sort is going to test you—it is going to change you.

My wife and I recently travelled to Paris for the first time, and it got me thinking about how spiritual a journey to a foreign place can actually be, that is, if you want to travel well. You have to embrace the unknown—like the food that looks wrong or the language that still escapes you.  You keep trying, even when the locals smirk when you try to speak their language, and so you laugh at yourself with them.  You have to become more flexible, and so you leave your own cultural expectations and prejudices behind you.  You become a quick study, particularly when navigating a foreign transportation system.  And more than anything else, you realize that you cannot pack everything that you might possibly want or need for your journey.

A pilgrimage will filter the things that you carry in your life. A pilgrim knows how to travel light.  What things do you carry with you daily that you can’t carry on a long journey?  How much baggage have you accumulated over the course of your life?  How about grievances?  Those are very heavy.  You cannot carry them for long.  How about your resume?  Sometimes it weighs a lot more than a simple piece of paper.  Do you take it with you wherever you go, taking it out to show to new people you meet?  Or leave it behind?  How about relationships?  You can’t take people with you if you don’t share a destination.  Or how about addictions?  Pilgrims know something the rest of us don’t—they know how travel light.

3) They know what it means to let go.

A mathematical equation forms the basis of a pilgrim’s hope. He exults that a single “day in Your courts is better than a thousand.” God’s presence is so very desirable that it outweighs any other experience that he could possibly imagine in his life.  And yet, half of this equation is an unknown quantity.  A pilgrim doesn’t really know what the journey will hold or what he’ll find on that distant shore.  He willingly leaves the security of everything that he knows for the promise of a good that he has never actually seen.  She trades the safe and predictable for uncertainty.  It is a quality that sets pilgrims apart from the rest of us.  They say their goodbyes and turn their eyes to the horizon because they know what it means to let go.

I am a pilgrim at heart, but unfortunately, I am a terrible traveler. I have a hard time making it across the Atlantic in a plane, let alone a seventeenth-century ship.  When they had not sighted land after two months, I would have been the guy who was convinced they had made a terrible mistake.  I might be a pilgrim in my heart, but I have a really hard time letting go, and the reason is because I hate feeling out of control in my life.  If I can take the wheel, then a great deal of the fear vanishes.  If I can schedule the itinerary, then I can plan my way out of having to trust.  Like most of us, I live under the illusion of control.  I have enough faith to get aboard a vessel, but not enough to experience peace along the way.  I still haven’t let go.

A pilgrim knows what it means to let go because a pilgrim understands hope. Hope is not found in flawless planning and preparation, or in making all the right choices along the way.  If it were, the pilgrims on the Mayflower would have been lost.  Hope is not found in having your hand on the wheel or your person in office.  No, hope is founded on something much greater and more durable—the character of God.  Only the vast goodness and faithfulness of God serves as an appropriate foundation for hope.  The psalmist closes, “The LORD will give grace and glory; no good thing will He withhold from those who walk uprightly.”  We hope, as pilgrims, because we are convinced that God is good all the time.

4) They know their true destination.

Very often, His presence manifests itself in a storm, not in calm, blissful weather. On a pilgrimage, you come to realize that you are not alone in the between decks of a ship in the grip of a storm, or in the grip of that cancer that threatens your life.  God goes with you, and you come to know Him in the eye of a hurricane, and not in the shelter of your house.  His presence becomes your hiding place.  You might never have learned that if you hadn’t stepped out of your door, left the security of everything that you knew and put yourself in a place of neediness.  A pilgrimage does that for you.  In truth, it is what a pilgrim knows better than anyone else.

I conclude with the words of a pilgrim song that I wrote, “The New Jerusalem”.

“There is a river that I see cascading from the holy place;

It satisfies a thirsty soul, and waters with His love and grace.

It fills the city of our God, and from His presence it proceeds

To strengthen all who would draw near. There is a river that I see.

There is a holy Lamb of God who came to set the sinner free.

From heaven, He was born a man and shed His robes of royalty.

He lived a life of righteousness and died to rescue what was lost.

He rose again in victory, and left behind an empty cross.

There is a new Jerusalem that shines upon a distant shore

And when You finally close my eyes, You’ll open them at heaven’s door.

For I’ll be carried by Your grace unto the new Jerusalem.”