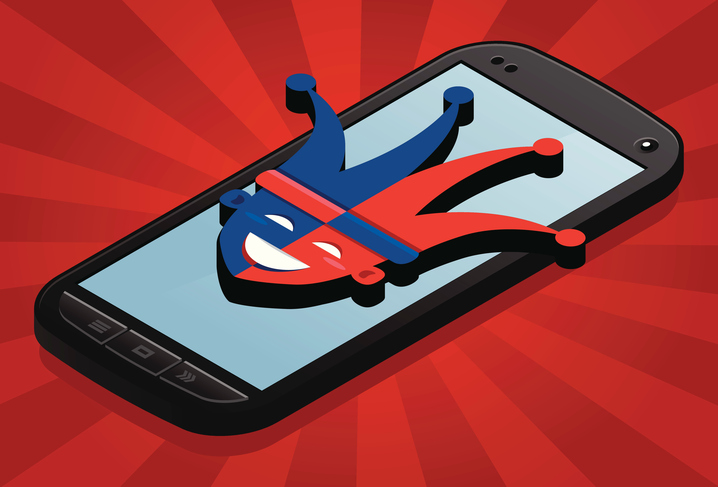 I have yet to meet anyone who is a big fan of clowns. I think that the wild make-up and hair, the funny clothes, and the unpredictable behaviors are threatening for us on a primitive level.  I was surrounded by more benign clowns in my youth, like Ronald MacDonald or Bozo the Clown, all of whom I could keep at a distance.  If a clown comes too close, however, they become frightening.  Clowns have quite a long history, and can be traced to ancient Egypt.  They were fixtures in Greek and Roman theatre, and have graced the courts of kings through the ages.  Intended for entertainment, they went by another name:  fool.  With a little research, you’ll find that there are a variety of clowns, all with different roles in the comedic action, but the one thing they share in common is the costuming.  There’s a reason why they often have the crazy red hair and the painted face, and it isn’t necessarily about scaring children. A fool has a costume so that you can identify him.

You might be surprised to know that the Bible has a lot to say about a fool, and gives clear guidelines about how to identify them. However, a fool in the Bible is not identified by their costume, but by the way that he or she behaves.  If you want to identify a fool, you could simply look in a mirror, because the truth is that we all act like a fool at times.  Another way would be to examine their behavior on social media.  Potential employers are doing more and more of this these days.  There are clear warning signs in someone’s online presence that are more telling than a red nose or baggy pants.  Social media, it turns out, is a perfect platform for a fool.

The author of Ecclesiastes, considered to be one of the luminaries of wisdom in literature, writes that a fool “multiplies words,” and that “a fool’s voice is known by his many words.” A fool goes on and on, whether in conversation or on social media, because what a fool really likes is to hear himself talk.  He isn’t interested in having a conversation, that is, in a back-and-forth exchange of ideas.  Why?  Because a fool isn’t interested in sharing ideas, but in being heard.  He is not seeking to understand, but to express himself. A fool wants an audience.

The author writes, “A fool has no delight in understanding, but in expressing his own heart.” How many times have you heard this rationale given on social media with regards to online rants, posts that are diatribes about something or other?  The person will justify themselves:  “I need to get this off my chest.”  Exactly.  It isn’t a conversation, but a rant.  That is the biblical author’s definition of a fool.  He continues:  “A fool vents all his feelings, but a wise man holds them back.”

What is wisdom? A wise person isn’t necessarily someone who is a highly educated or knowledgeable person; instead, it is someone who has the ability to look ahead and see how their choices today will unfold tomorrow.  They are able to make careful choices as a result.  This is particularly true with regards to words.  A wise person understands the inherent danger of words, that “in the multitude of words, sin is not lacking.”  As a result, a wise person “restrains his lips.”  Why?  Because he values relationship over rants.  His desire is not really to build an audience, but to build a relationship.  Hence, wise people filter their words.

2) Fools want to be affirmed, not corrected.

At the core of his existence, a fool is not particularly interested in learning from other people. Why?  Because “the way of a fool is right in his own eyes.”  He is thoroughly convinced of the rightness of his own opinions and choices.  He doesn’t want to listen to anything but the sound of his own voice, and so social media is an echo chamber that exists to reflect back his thoughts.  He wants to saturate himself with affirmation, isolated from reality.  The “like” button perpetuates his fantasy, as he builds an online audience who will like anything he has to say.

Unfortunately, social media also makes it incredibly easy for people to contradict or correct you, which is why a fool on social media is typically involved with one long argument after another. You see fights breaking out on seemingly unending threads where people can’t seem to let go, and where the comments get more and more nasty and personal.  “A fool’s lips enter into contention.”  He quarrels over anything because he can’t receive correction.  The author of Proverbs remarks, “Rebuke is more effective for a wise man than a hundred blows on a fool.”

That is exactly what differentiates a wise man in this regard. The wise are those who welcome correction from those who are qualified to give it.  “Rebuke a wise man and he will love you.”  Don’t misunderstand.  It isn’t that wise people aren’t involved in online disagreements, but the tenor of the dialogue will be altogether different.  They ask more clarifying questions, and make a lot less dogmatic and polarizing ones.  They are more interested in learning than in being affirmed.

Something drives a fool, something that is much deeper than understanding, and that something is reputation.  He is deeply concerned about how he comes across, and how he is seen by people.  He craves approval, and so anything that threatens that approval is seen as a personal slight.  Combine that need with a public forum like social media and it makes for a certain kind of behavior.  He is impulsive and quick-tempered, commenting on everything without thinking carefully.  A fool is offended by the slightest thing because he has no emotional ballast.  Like a drink calls to an alcoholic, the reply button beckons for him to shore up his reputation with every comment.

Honestly, this is where I myself struggle. I feel things passionately, and so my tendency is to comment quickly before I have time to sift my heart and weigh the possible impact of my words.  I tend to be emotionally reactive when I see a post that is offensive.  When I feel that way, I remember a subtle post that I once saw:  “You don’t have to comment on everything.  You can allow a post to slip by.”

Wise people create structures to rein in their reactions. The author of Proverbs puts it this way:  “A wise man fears and departs from evil, but a fool rages and is self-confident.”  What that means is that the wise would rather leave a discussion than participate in an argument.  They are keenly aware of the moment when that dialogue becomes a debate.  The wisest people I know are those who know when to take a discussion off the public forum.  One of my mentors has a “no respond” rule to which he adheres religiously. The wise set boundaries for themselves.

One of the worst ways to employ social media is to confront people online, and yet, this is the practice that you see used over and over again. It is nothing new.  Fools have used indirect communication forever, long before social media came into fashion.  When a fool has conflict in a relationship, they’ll often triangulate others into the conflict in order to gain power.  You see it happen in families or groups all the time, but social media takes it to the next level.  Why do they do this?  Because they don’t really care about relationship; they just want to win.

Watch your newsfeed. Someone will post how they have been so offended by some nameless person who said or did some terrible thing to them.  Is this just a rant?  Or a juvenile effort to communicate?  They seek to confront in an indirect way, with the power of opinion behind them.  Politicians have become even less subtle with this behavior, calling out people by name on social media.  Whatever you think of this practice, it is not an example of healthy communication.

5) Fools never learn from their mistakes.

Maybe one of the most famous proverbs goes like this: “As a dog returns to his own vomit, so a fool repeats his folly.”  They never learn from their mistakes, do they?  Why is this the case?  If the way of a fool is right in his own eyes, then he has no capacity to admit when he is wrong.  Instead, he keeps pursuing the same course, regardless of the damage that it leaves in his wake.

The wise learn from their mistakes because they own them. Remember my definition of wisdom from the beginning of this blog?  “A wise person…has the ability to look ahead and see how their choices today will unfold tomorrow.”  As Jesus said, “Wisdom is justified by her children.”  The reason wise people make good choices is because they have looked backwards and owned their mistakes.

In the United States, we have elected some people to political office who are the biblical definition of a fool, as I have carefully laid out in this article. Look at the way that some of these people govern by social media, and on the basis of what the wisdom literature says, it is indisputable that they are unequivocally, fools.  If you are someone who values what the Bible has to say, then you must seriously consider their behavior on social media, just like any other potential employer would do.  It would be foolish not to do so.

The question is, will you “go from the presence of a fool” in the choices that you make in the election booth, or will you allow fools to govern over us? The choice is yours.  But if you value what the Bible has to say about the wise and the fool, would it not be wise to learn from your own mistakes and choose differently?