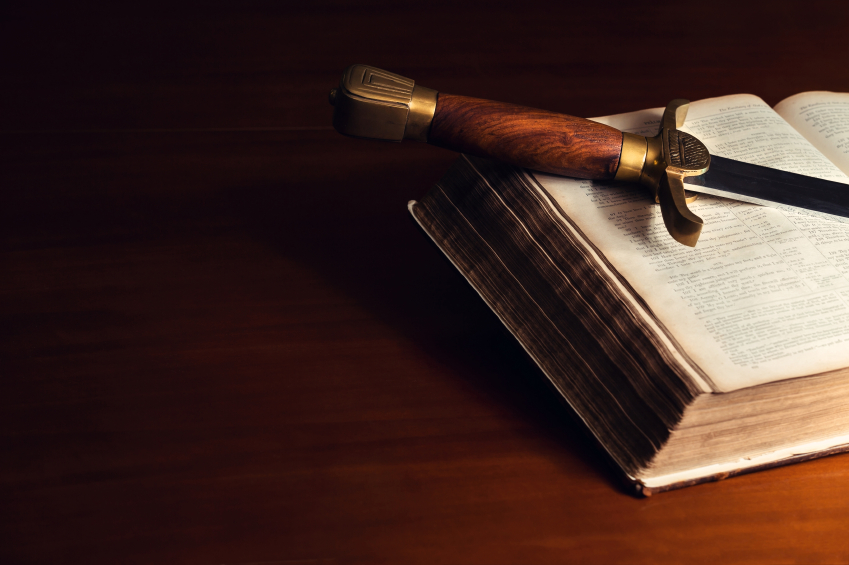 My father, Earl Radmacher, once had occasion to reprimand my brother and myself.  My brother and I collected toy soldiers.  These weren’t the plastic army men that you bought crammed in a bag hanging on some supermarket aisle.  These were crafted and hand-painted, authentic soldiers representing real eras of history, displayed in a glass case at the toy store.  We grew delirious as we contemplated buying them, and then we saved up our money.  The ones on horseback were $1.25 each!  We would arrange these forces in massive battle scenes that unfolded on the dining room table, building ramparts and staging conflicts that eclipsed that space.  My father came home one day, saw what we were doing, and promptly forbade us from engaging in that kind of play.  He was a famous conservative theologian, and about as red politically as you could be.  No reason that battle should bother him.  And yet, he was an independent thinker.  He never gave a reason for the prohibition–perhaps it was an artifact from his youth spent playing basketball in the gym of a pacifist church.  For my brother and myself, however, it was inscrutable.   How could soldiers not fight?  That was simply what soldiers were intended to do.  It was their purpose.

I have thought about that decision repeatedly over the intervening years, and wonder if it wasn’t one of my father’s finest moments.  The more that I look at the Scriptures and study what Jesus taught, the more I become uncomfortable with my culture’s fascination with weapons and warfare, and frankly, with aggression.  As a Christian, is this really what I am intended to do?  Is this our purpose?  And yet, I have repeatedly had other Christians call me a “liberal” with a sneer, and remind me that Jesus himself told his disciples to buy a sword.  How could that be?

Shortly before he went to the cross, Jesus was eating with his disciples in the “upper room,” celebrating communion.  A few minutes later, he tells them that whomever doesn’t own a sword among them should buy one.  When they reply that they have two between them, Jesus says, “It is enough.”  Really?  Two swords for twelve disciples?  And a few hours later, he reprimands Peter for whipping out his sword to defend him.  What should we make of these seeming contradictions?  And what relationship should a follower of Christ have with weapons?

Not surprisingly, Jesus reminds them of that journey at the beginning of this passage, before he starts talking about buying a sword.  On the journey, they were supposed to preach the kingdom of God and heal the sick, and he gave them power to do so.  But the strangest thing about their missionary journey was that they were to embark completely unprepared.  He gave them clear instructions.  “Take nothing for the journey, neither staffs nor bag nor bread nor money; and do not have two tunics apiece.”  Nothing?  Is that really what missionaries are supposed to do?

Only a few moments ago, I finishing helping my son pack for winter camp in the mountains, and that kind of command nearly gives me a panic attack.  My defense mechanism in any situation is to be over-prepared for whatever I might encounter.  In fact, my regularly recurring dream is that I find myself completely unprepared for something—like the opening night of a play and I realize that I’ve forgotten to memorize my lines, or getting ready to perform and being unable to find my score.  That scares me.  But those disciples were intended to be at the mercy of whatever situation they stumbled into.  They were meant to trust God for their defense.

Mission can mean that we will be exposed to moments of crisis in our faith, and frankly, in the lives of others, and those moments will require a degree of defense.  Jesus and his disciples are heading into one of those times.  In the upper room, he is spiritually and emotionally preparing them for his crucifixion, and he describes the level of opposition they will experience.  He remarks, “Simon, Simon!  Satan has asked for you that he may sift you like wheat.”  We read that verse in English and think that he is addressing Peter alone, but in Greek, he is using the second-person plural, “you all.”  All of them are in the crosshairs.  Jesus prays for Peter that his faith may not fail, and urges him to strengthen his brethren.  Mission is sometimes paused in crisis so that we can strengthen one another.

But there is a real complication:  disciples who are not on mission become defensive by default.  They begin to see everything as an attack.  Every moment becomes a crisis moment.  They see themselves as besieged by the world, and so their mission becomes to establish a Christian enclave of culture in which they can hide from the world.  They forget the prime directive.  They become paranoid and tribal.  Instead of pursuing mission, they create a little fortress and sally forth only to attack the world.  They are like modern-day crusaders.  How much do we see this happening on social media?  It has become a forum for Christians to attack opposing viewpoints, venturing forth in condemnation.  If disciples aren’t on mission, they misplace their true purpose altogether.

I remember serving in a church that was just this way.  You may or may not remember the term Y2K, or the hysteria that it produced, but nineteen years ago, Y2K was a big deal.  It referred to the turning of the computer clocks to the year 2000, and the fear that it would crash the whole system.  It sounds silly now, but people were worried about what might happen.  At this particular church where I served, it was more than hysteria—it was apocalyptic.  How did they react?  They distributed literature on how to build a bomb shelter and stock it, and held classes on how to dig a latrine in the backyard.  No kidding.  This is what happens when Christians are no longer on mission; they prepare to defend, grabbing swords instead of seizing the opportunity.  They forget that God is their defense.

3) So what about the weapons?

Christians, we are not soldiers.  That is not our purpose.  It is not what we were intended to do.  I’m not saying that Christians shouldn’t serve in the military, but rather, that isn’t meant to be our identity.  As Jesus clearly told Peter, “Those who live by the sword will perish by the sword.”  We don’t live by the sword; instead, we live by grace on mission, seizing every opportunity for the gospel of Jesus.

So back to my initial question.  Why were two swords “enough” for twelve disciples?  Some scholars think that Jesus was speaking metaphorically, so when his disciples produced two swords, it caused him to end the discussion in disgust.  That seems unfair to the disciples.  Other scholars think that Jesus was signaling the end of the discussion as they headed out for the Mount of Olives.  As far as I can discover, Jesus had never used that phrase to close a discussion before, and never would again.  I think the answer actually lies in the nature of a sword.

I have always been a sword fanatic.  As a young child, I saved up my money and begged my parents to let me buy an ornamental broadsword from Merlo’s Cutlery in our local mall.  But the thing is, a sword is not a gun.  In our interpretation here, we tend to equivocate the weapons, because we are no longer a sword culture. But they are different.  A sword has the potential to be a defensive weapon.  You can parry blows with a sword.  You can’t do that with a gun.  A gun can only defend by taking the offense.  The only way two swords could be enough for twelve disciples is if they were being used to defend others, and not to attack.

If we don’t understand our mission to reach the world for the kingdom of God, then we will be forever attacking the world.  But that is not our purpose.  We are not soldiers.  On occasion, we will be required to defend others so that their faith may not fail.  But we are intended to be on mission together.  Followers of Christ have been commissioned to go into the world with God as their defense, not a weapon, because on that mission, we will find that only God is “enough.”