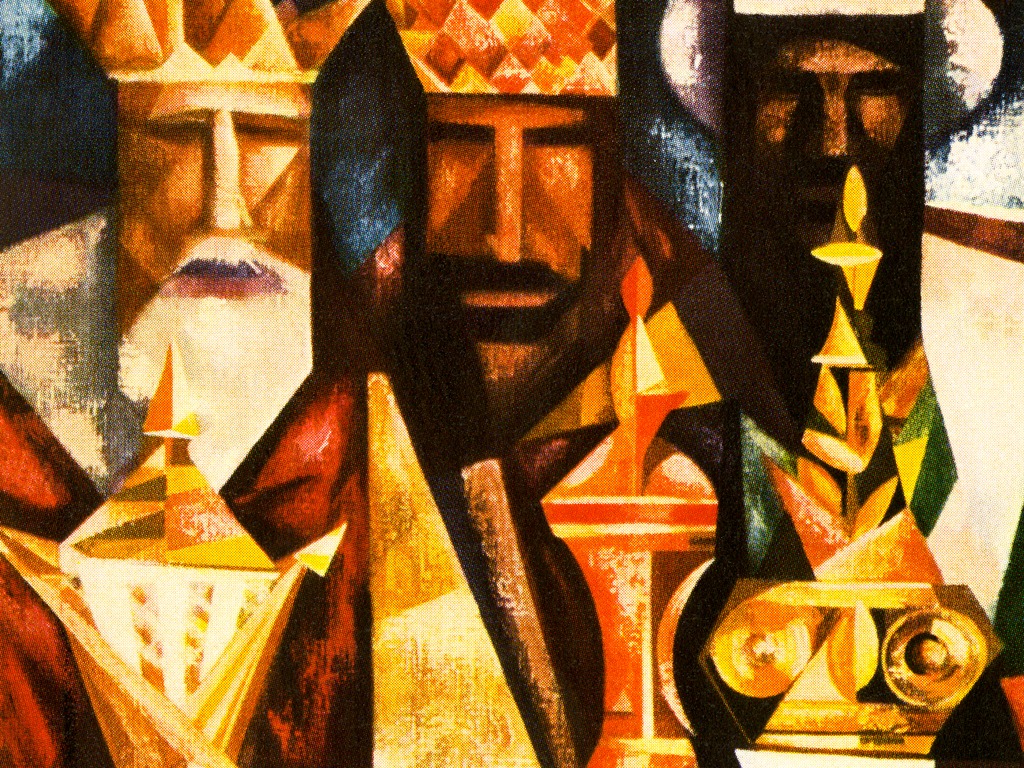 At Christmas this year, my eight-year-old daughter was fixated on our Nativity scene, and wanted to be responsible for taking all of the figures out of their boxes and carefully arranging them in their respective places.  This is actually a big deal in our house.  We purchased this set long before she was born, of course—a Lenox set that is formed entirely out of pure crystal.  The figures act like prisms that will capture any ambient light, and they are heavy and fragile.  It does have one oddity, however; there are no shepherds in this set—just the holy family and three “kings” bearing gifts for the child—which I guess makes this an Epiphany set.  But for my daughter, it is the only crèche she has ever known.  As she carefully unwraps each figure from the tissue paper, she tells me its name and weaves a little backstory of her own about each character.  We invent names when she reaches the wise men, but perhaps the most interesting thing is that we call them “wise men” at all.

One of the biggest misnomers of the traditional Christmas story is calling the travelers from the East “wise men,” because there is nothing of the sort in the text.  In the Greek, they are actually called “magoi”, with nothing about “wisdom” even mentioned.  I don’t know which translator first branded them in this way—Martin Luther was already calling them “da kamen die Weisen” in 1522—but it probably reflected more of what he thought about these guys than what the text read.  They ended up becoming “wise men” for posterity because of the wise choices they made.  To paraphrase the wisdom of Forrest Gump, wise is as wise does.

Wisdom is a little difficult to define.  Ask five people for a definition of wisdom and you’ll probably get five different answers.  Is wisdom a lifetime of experience or perspective?  Is it a special knowledge that someone has gained from a depth of study?  Is it a natural ability to read people and situations quickly?  Is it a kind of mystical endowment that one receives?  What made the “wise men” so wise?

The Greek text in Matthew says that “magi” from the East came to Jerusalem seeking the one born king of the Jews.  “For we have seen His star in the East and have come to worship Him.”  While we know almost nothing about these men, we actually know quite a lot about magi.  They were most likely from Mesopotamia or Persia, as the term originated there, where there was an old, powerful priestly order or caste.  Magi were “priest-sages,” highly educated, and “specialists in medicine, religion, astronomy, astrology, divination and magic.”  The magi of the Nativity would have been quite familiar with the Jewish religion, even though they didn’t know the Scriptures.  They were not kings, but would have been wealthy, as this kind of trip would certainly have required a whole entourage of servants.  One more thing:  they were not Jewish, but rather Gentiles, and so the persistent question is, why were they at all interested in the birth of a Jewish king?

Wise people love truth.  They hunger for learning.  They pursue their lives as a quest for enlightenment—an intellectual pilgrimage—and are motivated by a high level of innate curiosity about the world.  (In that sense, these magi were more pre-scientists in that they observed the natural world, but made existential connections from what they learned.)  So, they seek truth wherever it might lead, even if it falls outside of their own tribe or peculiar discipline.  Even though these magi were not Jewish, they sought a Jewish king, which means they were unafraid to step outside of their religion and make an arduous journey to locate him.  Why?  Because that’s what wise people do.  I’m not saying that they accept truth uncritically, but simply that they are passionate for truth.  They seek truth everywhere, no matter the cost, no matter where it leads—even if it leads them all the way to Bethlehem.

I grew up as a fundamentalist Christian, deeply committed to a body of truth that was inflexible and inviolable, and so we were continually having arguments about things like the age of the earth and whether dinosaurs and the fossil record were a hoax.  We were on the lookout for any evidence that would seem to disqualify the theory of evolution because that is what our tribe taught us to do.  Surprisingly, I discovered that one of my mentors—a “strong Christian” and a person that I really respected—believed in evolution.  I was shocked—how could that be?  I mean, if that were true, then what else was I mistaken about?  We believed out of fear, and not faith.  But he replied, “If the earth is actually millions or billions of years old, instead of just thousands, doesn’t it make God even bigger?”  Whether you agree with me about the age of the earth is not the point here; but rather, it is that wise people see truth everywhere, and so they are unafraid to seek it anywhere.

2) Wise people see through others quickly

I have always been surprised that the magi didn’t head straight to the palace in Jerusalem.  Wouldn’t that have been the natural place to look for a newborn king of the Jews—in the palace at the capital?  Instead, they came into town with their whole caravan and began poking around, asking after this elusive infant.  I try to imagine whom they could possibly have asked:  a group of peasants chewing the fat around the local watering hole?  An aggressive merchant trying to leverage a sale?  Did they head straight for the temple instead?  Maybe they already knew something about Herod.  Did they ponder it in advance over the long miles?

Herod caught wind of it quickly, and was troubled, along with all of Jerusalem.  Not surprisingly.  He was a fake king—a political appointee, actually—who was paranoid and willing to do anything to stay in power, including murdering several members of his own family.  The wheels were already turning when he summoned chief priests and scribes to find out where the Messiah was supposed to be born.  It didn’t take long for him to contact the magi secretly, and try to determine when the star was sighted and enlist them in his plan.  Interestingly, the magi could have just invited Herod to come along with them.  That would have been the easiest option.  Instead, they went their way, and any suspicions they might have had were then confirmed in a dream.  I personally believe that they saw right through Herod.  They would have been able to judge between a false king and the true one.

Wise people tend to see through people quickly.  They can see through all of the pretense to the real underlying motives.  Wise people are not easily fooled, which is why I am mystified at the uncritical support that I see for the current president of the United States from Evangelical Christians—who should be able to distinguish a false king from the true one.  Yet Donald Trump has more in common with Herod than they would like to admit.  A pathological liar, a notorious online bully, and a builder of monuments to his ego, he should be easy to read.  If you say, “Well the other candidate didn’t represent my values”—then fair enough.  But if you think this president has anything in common with Jesus, then open your eyes to truth.  Wise people see through others quickly, and make courageous decisions.

One of the most unusual things about the story is the way that they found Jesus.  When the magi left Jerusalem, it says that “the star which they had seen in the East went before them, till it came and stood over where the young child was.”  Now, I may not know a lot about astronomy, but I do know that stars are not GPS.  There is not pinpoint accuracy with a star, and it can’t lead you right to the curb.  Maybe even more surprising is that they knew immediately who the infant was—the king of kings—without the slightest doubt.  The author rhapsodizes a little in the Greek to describe how they “rejoiced with a great joy exceedingly.”  It wasn’t a palace, and Jesus’ diapers were not trimmed in gold, despite what the paintings depict.  And yet, they recognized him immediately.  They could see past the surface.

Much has been made of the fact that the magi fell down and worshiped, even though this particular word simply means to pay homage.  In fact, it is translated elsewhere in the Bible as “to kneel before” as this was rather the customary way that one paid homage in ancient Eastern tradition.  But I think what came next is what is really telling.  The magi opened their treasure boxes and gave gifts to the child—gold, frankincense and myrrh, some of the most precious offerings in the world.  These were men of great wealth, and yet, they didn’t worship it.  Instead, they yielded up their wealth as an offering to the person of greatest value, a king who deserved the best that they could bring, all of two years old, and they were happy to do it.  Why?  Because wise people see what really matters, and in this case, worship of the newborn savior with their treasure was of utmost value.

We see this dynamic played out every Christmastime.  I had a great discussion with my son about it the other day.  He kept saying, “I can’t wait until Christmas!”  When I asked him why, he said of course, “Because I get to play with new toys!”  I used to feel that way too, but it changes over the years.  Presents begin to lose their allure, and the things that really matter become clear.  I replied to Drake’s surprise, “You know, some people get sad every Christmas because they see who is missing around the tree.”  Wisdom sheds light on the things that really matter, the things at the core of our existence, the things of the utmost value.  We come to realize that the beauty of Christmas is not in the gifts, but in the relationships—the beautiful, complicated, messy, irreplaceable relationships that mean so much more as time flies.  Wise people see what really matters—they see through life.

The wise men followed the star to find the Christ-child, as the story goes.  Of course, nobody is really sure what that involved, but I am confident of one thing:  the star they were following the entire journey was actually a star of wisdom.  The interesting thing in life is that everyone thinks they are wise, and everyone is given the opportunity to make wise or unwise choices.  We only find out in hindsight the truth.  Maybe that trip to Bethlehem seemed foolish, but looking back, we discover that it was the wisest choice they could make.  May the star that you follow this coming year be the same one that the magi followed.  Wise is as wise does.