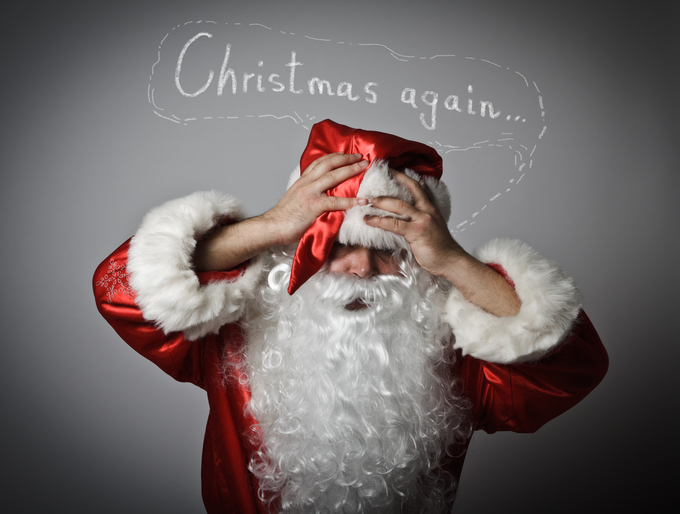 As Christmas rolls around every year, I am reminded of two things: how much I love Christmas, and how much of a hassle it truly is.  I’m not Scrooge or anything, because I do love Christmas, but it really is a hassle.  It starts early in October, as we brace for the onslaught of Christmas catalogues that will inundate our mailbox over the next few months.  We enjoy hosting our Trader Joe’s Christmas party, but it requires a week of shopping and three days of cleaning.  We relish putting up the tree with the kids, but every year, it is stressful trying to control the ornament flow, and their excitement level is so high that I feel I either need to put leashes on them, or administer a goodly dose of Benadryl.  On Christmas morning, no one sleeps in, of course.  After Christmas, the real hassle begins, because if you buy your spouse an article of clothing, it is invariably the wrong size, and must be taken to the post office and exchanged in a timely manner.  Christmas is a serious hassle.

When I read the account of the first Christmas, I have the same impression. Christmas was a serious hassle for everyone involved:  Mary, Joseph, Jesus, the wise men and shepherds—everyone.  Now it is possible that I am just really averse to hassle.  Maybe I think that I deserve a hassle-free existence.  However, I want to tell you something:  that would not be good for anyone.  A hassle-free existence is one in which we would all spiritually stagnate.  Hassle has a necessary side.  At Christmastime, I am reminded once again that God is in the hassle.

1) Hassle reminds us that we’re not in control.

Caesar Augustus orders a census of the Roman world. He was the first “emperor” of Rome, and by Roman standards, was an excellent leader.  He managed to bring peace after a series of civil wars, and greatly expanded the empire.  He established a network of roads, and rebuilt much of Rome. He was a religious reformer, trying to create revival and discourage promiscuity, building some eighty-two temples in Rome alone.  He ordered censuses for the purpose of taxation, and it required that Joseph and his new family return to his home of origin.  Caesar had a plan for how the empire would grow, but he didn’t know that he was part of a larger plan.  God uses leaders of all kinds to accomplish His purposes in the world.

So Joseph is forced to travel to Bethlehem to be registered. From a new father’s perspective, this is completely out of control.  He has a very pregnant wife, and yet some Roman emperor thousands of miles away can demand that he make a three-day journey by donkey so that he can be taxed.  This would be akin to us making a journey by motorcycle from one side of the country to the other with a wife whose water is about to break.  There isn’t much that is more inconvenient than taxes; endangering the life of your wife or unborn child has got to be one of them.

The remarkable thing about this story is just how matter-of-fact it actually is. We are given no clue to the emotional state of Joseph.  I would have been freaking out.  The route to Arcadia Methodist took ten minutes, but I had driven it many times in advance of my son being born.  Why was Joseph so confident?  Could he have just disobeyed the rules?  Did he really have to go right away?  Surely it was possible to delay or have an exemption?  He was confident because he knew that there was a greater king than Caesar, and that the situation was not out of God’s control.

2) Hassle redirects our confidence to God.

Those who know God know that He is in control, and that events play out according to a sovereign plan. All that means is that with all of the choices that could ever be made over the entire span of history, God will accomplish His plan through those choices.  There was a lot that Joseph and Mary could already know, and that would have been comforting.  What they didn’t know was how much pain and suffering would be involved, hence the fear.  If Mary would have known what would happen to Jesus thirty-some years later, would she have been more or less confident?  Sovereignty is a fancy word for the faith that comes with hindsight.

What is it that angel says to so many of the people in this story? Be not afraid.  Be not afraid.  When you look back on your life, it is easier to trace God’s hand in the events that led you to the place where you are.  Looking forward, however, all that we see is the unknown, and frankly, the confusion.  We cling on for dear life when we encounter situations that are completely out of control.  Things like hassle pry our fingers away from control, and force our hearts to turn to faith in God.  The truth is that God is in the hassle, because God wants you to trust Him.

The birth of Jesus must have seemed completely improvised. As they traveled all the way to Bethlehem, they must have been expecting that God would provide for them.  When they found the inn crowded, perhaps they were tempted to disbelieve.  Perhaps Mary broke down weeping as the labor pains intensified.  Perhaps Joseph began to panic as he knocked on more doors around town, ending up in a cave that served as a stable.  However, I’ll wager that as they encountered obstacles later in life, Mary would look at Joseph and wink, saying, “Remember the inn?”  Those who are able to lock onto God’s perspective begin to see God in the hassle.

I want to make you a promise this holiday season: you are going experience hassle, and it is going to frustrate you.

It might be due to the fact that you have to travel, and you experience long lines and crazy conditions so that your holiday is ruined by the sheer work that it takes to travel. It is a hassle.  That couldn’t be God’s plan, could it?

It might be due to the fact that you have some kind of emergency and you have to improvise an answer that isn’t as easy as if you had been at home. You’ll have to make it up on the spot and it will be so very inconvenient.  It is a hassle.  That couldn’t be part of God’s plan, could it?

It might be due to the fact that you have to spend time with the relatives that you don’t really like. And you’re in their home, and you’re not very comfortable with the accommodations, and you think, “If I could just get away from them…”  It is a hassle.  They couldn’t be part of God’s plan for you, could they?

I want you to take a breath and repeat after me: God is in the hassle.