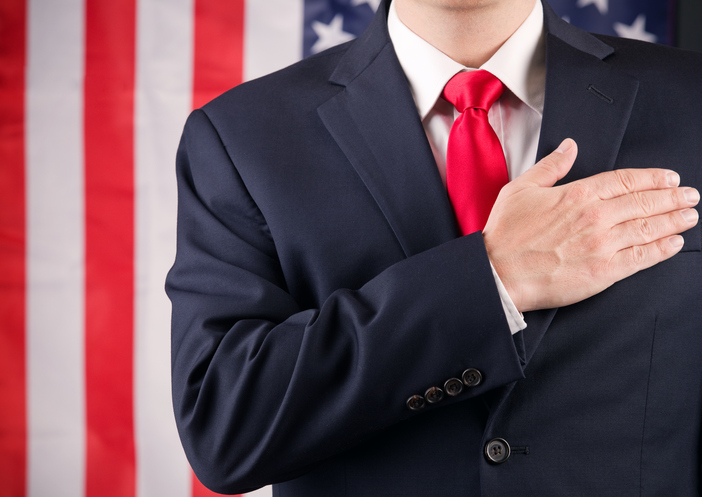 As far back as I can remember, I have been obsessed with history, particularly American history. When other young boys I knew were reading comic books, I was studying textbooks about the Revolutionary and Civil wars, memorizing the names of our founding fathers, and drawing their pictures in my notebook.  As a family, we visited Philadelphia in 1976 for our nation’s bicentennial, and I found myself walking through the hallowed grounds of Independence Hall with the kind of awe that a Harry Potter devotee might experience at Hogwarts.  As a freshman in high school, I made it to the finals of the Optimist International Oratory contest with a speech that I had written about the American patriots.  These things have always been imbued with a kind of magic for me.

I come by it honestly, because I have America in my blood. My ancestors came over from Denmark in the mid-1600s and fought in almost every major war.  My great, great grandfather Orrin Matteson was with the 211th Pennsylvania Infantry Regiment at Appomattox in the final days of the Civil War.  I have several uncles who participated in WWII, one who was part of the D-day landings, one who was stationed at Pearl Harbor, and one who was wounded in the South Pacific when his plane was hit.  You don’t get much more “American” without either having ancestors on the Mayflower or among the native Americans who already lived there.

But as a devout Christian, I begin to get uncomfortable when that line between faith and country begins to get blurred. I know that this country was founded as a reaction to that intermingling of church and state, and yet, I find historically that it is easy for people to cross that line without realizing it.  Whenever that happens, it is never a positive thing for authentic faith.  Why?  You can’t pledge allegiance to more than one kingdom at a time without one of them taking second place.  Since it is so hard to see when that is happening, I submit these three warning signs for your consideration.  You know you are worshiping your nation when…

1) When you treat the Constitution as a holy book.

As we approach the interpretation of an “ancient” document from another time, place or culture, we are always wise to look for “authorial intent.” We are seeking to understand what the author intended by what he or she said, and so that involves considering his or her language, cultural norms, historical situation, etc.  That just makes good sense, and everyone involved in the interpretation of the Constitution wants to do that.  However, the “originalist”, at least the religious one, wants to take this a step further.  The originalist wants to say that the Constitution essentially participates in eternal truth as it taps into Judeo-Christian values.  Hence, the whole of the Constitution is in a sense transcendent in its original state because of this divine connection.

(Now, this article is not meant to be a comprehensive treatment of originalism, and I understand if you disagree with the way that I have described it.  The secular debate over what this theory means is still being sorted out in jurisprudence, and perhaps another word will develop over time that I should use.  But the point is that this is how faithful, intelligent, American Christians who hold this viewpoint have described it to me.)

I believe that this kind of talk ought to make any Christian nervous. Why?  Because we would say much the same thing about the Bible.  The Bible says that “holy men wrote as they were moved by the Spirit.”  They condensed eternal truth into their own language, customs and culture.  Do we really want to make the same claim for the Constitution?  I don’t.  Moreover, we believe that the Spirit continues to illuminate the ancient words of the Bible into our own culture.  In that sense, we believe that the Bible is the only truly “living document.”  If you’ve elevated the Constitution to the level of a holy book, then you might want to reconsider.

2) When you portray the founding fathers as holy men.

Several years ago, I was able to visit “Plimouth Plantation” in Massachusetts and sit down to speak with one of my heroes, William Bradford. He was an actor who was part of a recreation of the original community in the year 1627.  Bradford was the governor of Plymouth for a long time, and an incredibly devout man.  But my obsession with Bradford reveals something else.

We tend to take the founders of our country and place them on the level of holy men, like the apostles and prophets. Those who desire to claim that America is a Christian nation will become insistent on this point.  I have heard people claim that Thomas Jefferson was not really a Deist after all, but a strong evangelical Christian who has been redacted by liberal scholarship.  That is bewildering language.  They want to see biblical principles underneath the entire American experience, and so that must apply to the faith of our fathers too.  Never mind that this is untrue.

Why do Christians try to make this claim? There is actually a long history in this country of taking promises that were made to Israel in the Bible and applying them to America as a “promised land.”  Ever heard it said that God will “heal our land if we humble ourselves and pray?”  Exactly.  Nobody was more given to this practice than the Pilgrims themselves, who felt that God had sovereignly created a place for them, moving natives out of the way just in time for their arrival.  We come from a long line of people who want to see themselves as God’s chosen people.

The interesting thing about the Pilgrims is that they were a community of people who were seeking religious freedom. However, they came to this land and ended up forming a community of intolerance.  Enjoy the holiday of Thanksgiving, but know that the Pilgrims did not live peacefully with their neighbors for long.  In a preemptive strike, emissaries of Plymouth ambushed their adversary Wituwamat, and displayed his decaying head atop the fort for months.  Just fifty years later, in response to a native uprising, they began selling the natives into slavery.  In fact, my ancestor, Henry Matteson, moved to East Greenwich, Rhode Island just after the conflict.  He was very likely one of many who were given property there for “services rendered” in what came to be known as the “King Phillip’s War.”

When you sanitize the story and sanctify our fathers as anything other than flawed people, there is a problem.

3) When you place your hope in a political leader.

Several years ago, we were gearing up for a presidential election, and so there was lots of election paraphernalia—yard signs, posters, and bumper stickers—floating around. One of them I found particularly disturbing.  The piece featured a picture of the candidate with a single word underneath:  hope.  Now, let me just say that I supported that candidate, but when I saw that piece, I said, “Uh-oh.”  Why?  You cannot place your hope in any political leader because you will be let down.

Hope is a weighty thing. Hope requires a strength that no human can carry.  Hope demands that someone can perfectly supply all of our needs, including our need for salvation.  No one here can do that.  The problem that invariably happens when we elect a new leader is that we begin to place our hope in those people or institutions who are incapable of supporting the weight of hope.  That is called idolatry.

Honestly, I think that in our hearts, we long for something that is right and good. We long for a benevolent, all-powerful authority to reign over us.  We long for the thing that is missing in our spiritual lives, but we make the mistake of taking things or people and placing them on pedestals so that we can bow down to them.  We put our security and happiness in their hands.  The thing about idols is that they tend to fall from their pedestals and shatter in an awesome and devastating manner.

You might ask, what can I do to counter this tendency in my heart? Admit that America is a nation like any other in the history of civilization.  We are no more special to God.  We are not exceptional.  Confess when you place your country on a pedestal in your heart and worship it, much as you would any other idol.  Finally, endeavor to be the kind of people that God has called us to be.  Our allegiance is to no nation upon this earth.  As Christians, we share a heavenly citizenship, and the sooner we claim those “documents,” the sooner we change the world for Christ.