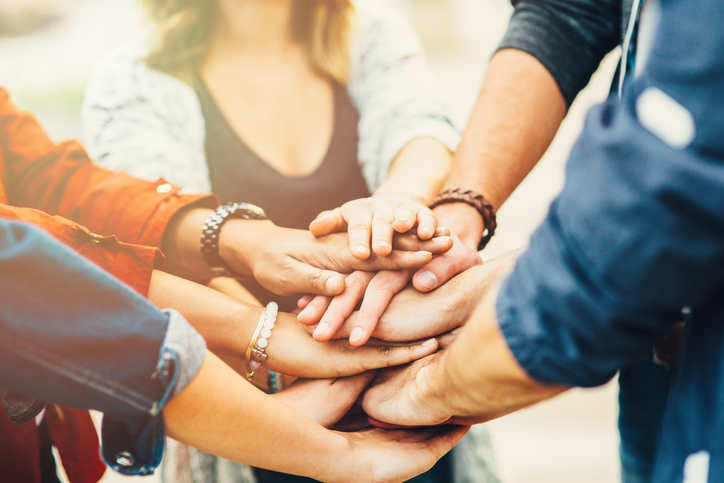 I grew up in a suburb of Portland, Oregon on a little cul-de-sac with four other families. Because we shared a common driveway, it created the potential for a close little community, more than in a typical American neighborhood.  However, a living arrangement of that sort also brings your differences into sharp relief.  On our right, we had a family with annoying younger kids, a chain-smoking mom, and a Samoyed that never stopped barking for a minute.  Across the street was a fairly nice older couple who had dug the foundation for a carport but never managed to complete it, and so the eyesore filled with debris every winter.  At the entrance to our street was a grouchy elderly lady who was angry at everyone most of the time for no apparent reason.  This was our little “community.”

What if you could hand-pick the community in which you lived so that there was no person who was terribly different, no person who stuck out from the main, no person whose ideas you had to tolerate or whose preferences were questionable? What if you could select your own world? Those are the communities that we try to create for ourselves, whether in our gated neighborhoods, churches, clubs, and so on, but it never completely works.  Enter the world of social media, where you can choose your own community of people who are like you, and then “unfollow” the rest.  An algorithm will continue choosing for you.  The problem with social media is that you can fashion a community that looks and sounds just like you.

I recognize these tendencies in myself, and even more as I approach social media, and so I decided to try a little experiment. I decided that I would randomly friend 200 people whom I didn’t know at all and begin to participate in their community.  I wanted to step out of my echo chamber and interact with others who might see things quite differently from me.  What I found was not a horrifying experience, as friends had warned me, but a transformative one.  Here is what I learned.

This has always been my biggest struggle in the online world, and I think that is true for many people. Our differences feel much more emotionally charged, and it feels hard not to “take a stand,” as if you have a moral obligation to speak out on everything you see.  Moreover, we often speak more passionately and less carefully online, as if we exist in a morally neutral bubble.  I’ve always thought that people become the worst version of themselves driving a car and online.

I stumbled into a thread of conservative Christians doing a little victory dance about the latest Supreme Court nomination. They were deeply pro-life and very passionate about the issue of abortion.  I respect their views and to some degree, even share them.  However, I found the language that they were using regarding the other side was extremely disparaging and beyond unkind.  They kept trading remarks on how very stupid the progressives were, in what seemed to me like a feeding frenzy of sarcasm.  Unfortunately, I have found that this is actually the norm for the way that many Christians speak on social media.

As a devout Christian, I was shocked and incensed. I kept thinking to myself, “Do they realize who might be listening?  Do they even know someone from the other side?  Would they speak this way to their faces?”  If you don’t really know people who see things differently than you—if you don’t talk to them and cultivate those kinds of relationships—then it is easy to make them into a caricature or a cartoon.  It is easy to see their beliefs as flimsy or insubstantial when you haven’t taken the time to listen to their story and understand their perspective.  But the only way that we reach understanding is to begin to actually listen to one another.

My first reaction was to react. I wanted to set them straight.  I wanted to accuse them.  But then I thought, “If I do that, then I lose an incredible opportunity, not to argue with them, but to understand, and perhaps to win them.”  Ask yourself a very important question, not about social media, but about life itself:  Am I here to know someone and to be known?  Or am I here purely to express myself?

When there was a disagreement, I first responded with a “reflecting statement” in which I would summarize their position with, “So you’re saying that…” I would try to match exactly the tone and content of their message before I responded with a question of my own.  Maybe that seems like a little thing to you.  On the contrary, it is an incredibly powerful way of letting others know that they have been heard and understood, and that their opinion has value.  It is also a way to guarantee that you actually listen to them in the process.

Go back to the basic motivation: to know someone and to be known.  Perhaps more than anything else, people want to feel heard and understood.  Even if you don’t agree with them, they will feel respected if you approach the discussion by trying to first understand them.  My brother-in-law has a saying:  “Being listened to feels so much like being loved that most people can’t tell the difference.”  If I could approach every conversation this way, would it change the outcome?

Whenever I approached a conversation like this, even with people who were completely opposed to my viewpoint, we almost always found an area in which we could agree. Moreover, I found that the relationship was not severed by our dialogue, but it grew.  Pursuing our differences in grace and kindness actually builds relationships, and creates a platform to solve real problems.

3) Listen to learn, not just defend.

I discovered something very interesting in the process of this experiment, something that I have always suspected but never tested. Most people who comment on articles on social media don’t actually read the articles; they just respond to the headline.  Sometimes the headline misrepresents what is in the story, but people will respond from their own presuppositions about what the title says, not what the article teaches.  Why is this the case?

In our defense, we have to process so much new information on a regular basis. We tend to evaluate it, not purely on its merits, but on whether or not it fits with our worldview.  As a result, we can scroll through a lot of conflicting data without having to scrutinize it too carefully.  The downside here is that I am not engaging with new information.  I am simply taking shelter in my “certainty,” and denying myself the open ground of learning.  If what I really want is to learn, however, then I have to welcome the real possibility that I might be wrong.

The interesting thing about this experiment was that people began to enter my world and community and suggest that very thing. People whom I didn’t know at all would show up on my threads and challenge me or my friends, sometimes in a none-too-gracious manner.  People were ready to tell me that I was wrong.  Could I practice what I preached when I found myself on the defensive?  Could I listen to learn, not just to defend?  If I am listening to learn, then I can more easily identify the place where we agree.  That place is transformed from a no-man’s land into fertile ground on which to collaborate.  This is how real problems get solved.

So I challenge you today, reader, to go out and friend 200 people whom you don’t know at all. If you’re not on social media, you can do it by creating a network that is totally out of your normal circle, like an athletic team, a choir, or a book club.  In the experiment, don’t go out of your way to avoid differences.  Avoid creating yet another homogenous community.  Instead, use these few techniques to engage with others who are different, and see if the experience is not transformative.